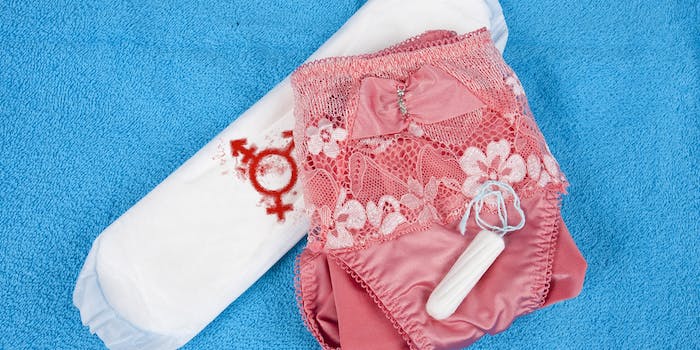 ‘If Men Had Periods’ accidentally raises awareness about transgender health

Actually, some guys do menstruate.

What would it be like if men had to endure menstrual periods each month?

The classic response to this question usually hinges on resentments about the cost of menstrual products (“tampons would be free”) or the lack of medical recognition of just how crippling cramps can be (“we would all have ‘period leave’ at work”). While it’s true that menstruation has been made even more difficult over centuries of shame, stigmatization, unsafe products, and lack of research interest, there’s one big problem with joking about how different things would be if men only had to endure monthly bleeding.

Some men, as it turns out, do get periods.

As the hashtag #IfMenHadPeriods trended on Twitter on Tuesday, the responses ranged from jokes, to anti-feminist trolling, to criticisms from transgender advocates.

Men have periods. If u only referring to cis men, say so. U are erasing trans men & trans masculine ppl who have periods #IfMenHadPeriods

#IfMenHadPeriods: many of them do, but you refuse to listen to their experiences, so what's the point of this hashtag?

The trans men—and their supporters—who responded to the hashtag were quick to point out that many men do, in fact, menstruate. And the ignorance surrounding transgender health is only exacerbated by the misconception that there are no menstruating, cramping men.

Tampon companies don’t market to trans men, and the concept of the men’s pap smear hasn’t caught on among all gynecologists. As writer Mitch Kellaway explained in a 2015 Everyday Feminism article, even the idea of visiting an OB-GYN is terrifying to many transgender men.

The current lack of healthy, open, guilt-free discussion about our bodies feeds into a serious gap in trans men’s healthcare that has potentially fatal consequences when you consider that pap tests are used to screen for cervical cancer.

Body shame, combined with fears over transphobic treatment from medical providers and an increased likelihood of gynecological care not being covered by health insurance, amounts to a potentially deadly health disparity that’s unique to trans men.

If some trans men already get nervous about the idea of a stranger staring into their vagina, imagine how much more uncomfortable it can be to have to educate a trained medical doctor about how to treat your own body. As the co-founder of transgender health care app MyTransHealth told the Daily Dot last June, many trans people find that doctors simply don’t know what to do with their bodies and medical needs.

“Over half of trans people educate their doctors on how to treat them,” Clark told the Daily Dot in June 2015. “And then about 19 percent are refused care. They don’t even have the chance to educate the doctor because they won’t even see them. So people get to a point where they stop looking for care, which is the biggest issue.”

The need for increased research and lowered stigma regarding menstruation is real, and sometimes it helps to blow off steam by imagining how much better things might be if, say, Republican vice presidential candidate Mike Pence had to stick a winged pad in his underwear for five days each month.

But denying that men have periods at all creates even more silence around transgender health care needs—and that is something that people desperately want to see change.