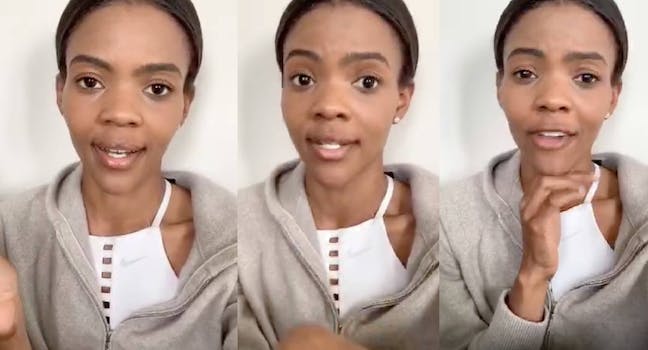 'We come to this Whole Foods EVERY DAY.'

Candace Owens is quite displeased with how the coronavirus has affected her Whole Foods experience.

The conservative pundit recounted on Twitter how she and her husband were questioned by a police officer for not wearing face masks during their trip to a Whole Foods they frequent in Washington D.C.

“WOW. Just had a police officer called over to me and my husband at Whole Foods bc we were not wearing masks. We come to this @WholeFoods EVERY DAY. Apparently beginning yesterday, it is now illegal to come in without a mask,” Owens tweeted. “Total deaths in D.C from Covid? 69. WTF if going on?”

“So what happens if I don’t want to wear a mask at Whole Foods?” Owens said during a Periscope video she posted in response to the ordeal. “Am I going to get arrested?”

Despite Owens making the ordeal more about her freedoms, many zoomed in on the fact about how frequently she admitted to visiting Whole Foods.

“I do go to Whole Foods every other day, minimally,” Owens said. “Sometimes I go every day, and I know that sounds crazy but I live near Whole Foods, I love to cook and there’s always one thing that I forget.”

Bowser issued a stay-at-home order for the D.C. area, effective April 1-24, which still allows residents to go to the grocery store.

“This is now butting into something that is tyrannical,” Owens said about the local government’s response to the coronavirus. “This is not a quarantine, this is house arrest.”

Owens told her almost 70,000 Periscope viewers that she’s not a part of the “corona crazies,” and touted she has yet to wear a mask while out in public.

“I’m one of those people who believe first and foremost that you should expose yourself to germs because it helps you to build up immunity to anything,” Owens said.

Some, such as CNN reporter Oliver Darcy, pointed out to Owens that Bowser’s order attempts to protect employees still working at local grocery stores from further exposure to the coronavirus.

Activist DeRay McKesson quote-tweeted Owens’ tweet with the response, “I guess racism is real, eh,” taking a jab at Owen’s past attempts to “disprove the existence of racism.”

During her Periscope video, Owens continually compared responses to the coronavirus to that of the flu, criticizing local governments for not responding in a manner she saw as fair, she said.

“This is a complete violation of all our freedoms,” Owens said.

Owens’ response is similar to that of other conservative pundits.

In March, Dr. Anthony Fauci, director of the National Institute of Allergy and Infectious Diseases, characterized the coronavirus as “10 times more lethal than the seasonal flu.”