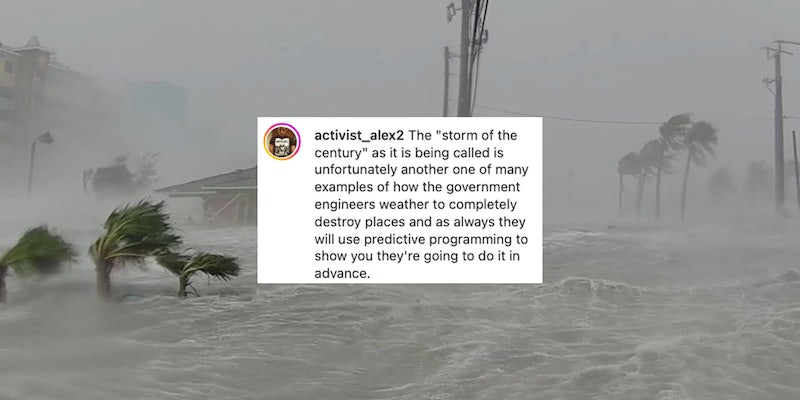 Conspiracy theorists are blaming the government for Hurricane Ian

Conspiracy theorists are spreading the claim that Hurricane Ian was “engineered” by the federal government in order to kill anti-vaxxers in Florida. Obviously, that isn’t true.

The bombastic claim appeared on Instagram earlier this month before spreading across other social media platforms.

The post, made by an Instagram user known as Alex Jeffrey, asserts that “Satan” tricked those opposed to lockdowns and vaccines into moving to Florida. Once in Florida, a state that was much more lax during the pandemic, those “fighting for freedom” were killed off by the government-created storm.

“The ‘storm of the century’ as it is being called is unfortunately another one of many examples of how the government engineers weather to completely destroy places and as always they will use predictive programming to show you they’re going to do it in advance,” the post bizarrely claims.

Photos accompanying the post also show the 1999 Stephen King horror miniseries known as Storm of the Century and suggests that the decades old movie was released in order to prepare the public for Hurricane Ian.

The post even attempts to argue that a professional hockey player named Ian Cole, who was recently signed to the NHL’s Tampa Bay Lighting, is proof of “predictive programming” regarding the storm.

The comment section under the post was filled with remarks from others who similarly believed that Hurricane Ian had been some sort of Satanic government operation, despite Florida being well known for experiencing such weather events.

“I was thinking the same thing—all the people moving there and DeSantis is awesome and then wham hurricane,” one commenter wrote. “Very interesting timing.”

While it may come as a shock to some, there is no evidence that Satan helped Stephen King develop a miniseries about a storm, convinced a hockey player named Ian to join a team with a weather-themed name, and aided the government in getting conservatives to Florida to be killed by an engineered hurricane.

Although such conspiracy theories may appear ridiculous to the vast majority of the public, the Instagram posts shows that some people do actually believe such outlandish claims.

Blaming the government for devastating weather events is not new. And throwing apocalyptic fervor and other popular conspiracy theories into the mix only serves to convince those on the fringes that such claims must be true.