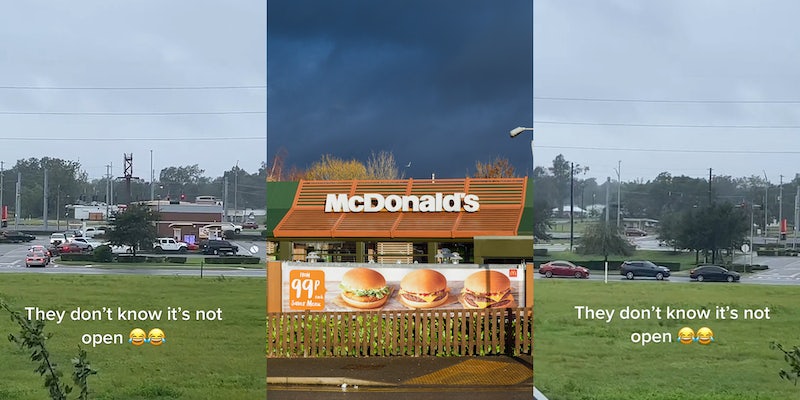 ‘So at what point will they realize?’: Cars line up at closed McDonald’s drive-thru during Hurricane Ian

'When you’re an automated program in America and forced to work during a hurricane.'

Hurricane Ian devastated parts of the Gulf Coast and Central Florida this week, but at one McDonald’s in Lakeland, Florida life went on as usual. At least for the customers.

TikToker Patrick Lambert (@tricklamb) captured a McDonald’s that was apparently closed but had left its automated drive-thru response on during the storm, leading people to believe they could order. Lambert shows a line of cars spilling out onto the street, some of which are trying to turn around.

The video has garnered more than 970,000 views as of Friday.

He also went down for a closer look, documenting people ordering into the void and then driving off. “It is now 5pm Eastern, and it’s still going on,” he says in a follow-up video. “I’ve been here since 8 in the morning. No one at any point today has ever stopped to tell these people it’s actually closed.”

Lambert adds in the comments that he did actually go through the line to tell people it’s closed. He even made a sign.

In the comments, others in the area claim something similar has been happening at nearby McDonald’s locations. Other TikTokers posted similar videos of lines of cars idling, oblivious, from the morning into the evening, presuming that fast food employees would be working through the storm.

“Bro, you can’t make this shit up,” @therealmalone says in their video, after surveying a line of cars that apparently couldn’t see the “closed” sign on the drive-thru window. “Only in Florida, man.”