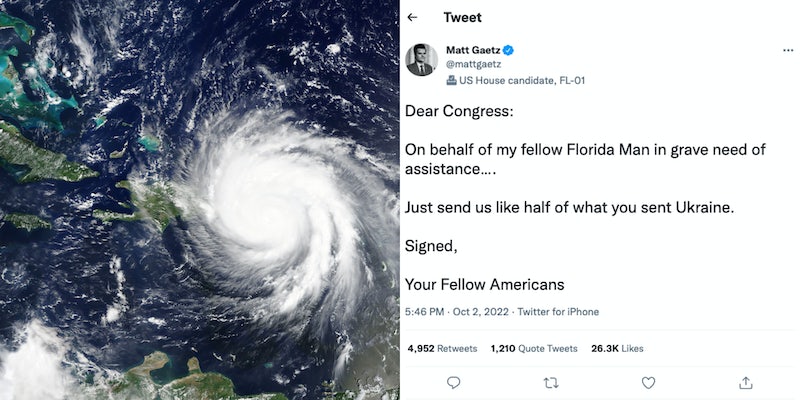 ‘Voting against your own interests just to own the libs can be tragic’: Florida Republicans beg for hurricane relief after voting against it

Last week, Hurricane Ian tore through Florida, leaving behind a swath of death and devastation that will take years and cost billions to repair. Congress swiftly passed a spending bill that included $18.8 billion for relief from Hurricane Ian and other future disasters.

Every single Florida Republican in Congress voted against it—except Sen. Marco Rubio (R-Fla.), who didn’t even bother to show up to vote.

That hasn’t stopped Florida Republicans from begging for aid to help rebuild their state, however. Now the internet is reverberating with accusations that they’re all hypocrites.

The bill was a stopgap spending measure that averted a government shutdown. In addition to hurricane relief, it included aid for Ukraine, funds for the Food and Drug Administration, money to address the Jackson, Mississippi water crisis, and more.

Only 10 Republicans voted for it. Those who voted against it said they were protesting Democrats shutting them out of the process of creating spending bills.

Democrats were nevertheless exasperated by their colleagues.

During debate, House Rules Chair Jim McGovern (D-Mass.) reportedly said, “We are talking about hurricane relief for God’s sake. I’m begging my Republican friends: Can we at least come together to agree on relief for communities devastated by hurricanes?”

Even though neither supported the bill, on Friday, Rubio and Sen. Rick Scott (R-Fla.) sent a letter to the Senate appropriations committee begging for hurricane relief.

“Hurricane Ian will be remembered and studied as one of the most devastating hurricanes to hit the United States. Communities across Florida have been completely destroyed, and lives have been forever changed,” Rubio and Scott wrote.

“A robust and timely federal response, including through supplemental programs and funding, will be required to ensure that sufficient resources are provided to rebuild critical infrastructure and public services capacity, and to assist our fellow Floridians in rebuilding their lives.”

Their plea for aid hasn’t curried much favor with online commenters.

“[Sen.] Rick Scott [R-Fla.] is out here begging for hurricane relief after voting against a bill that funds FEMA,” @covie_93 tweeted incredulously.

Rep. Matt Gaetz (R-Fla.) contributed to the discourse with his usual savoir flair. On Sunday, Gaetz tweeted, “Dear Congress: On behalf of my fellow Florida Man in grave need of assistance…. Just send us like half of what you sent Ukraine. Signed, Your Fellow Americans.”

People wasted no time pointing out that Gaetz is in Congress and he in fact voted against the bill.

“Voting against your own interests just to ‘own the libs’ can be tragic,” @tim_maliyil commented.

Gaetz’s tweet made it to the White People Twitter subreddit. Redditors were similarly unimpressed. While many directed their ire at Gaetz and his fellow Florida Republican representatives, a significant number of comments blamed the people who vote them into office.

“Honestly, most of their base doesn’t really seem to follow up on any of the claims made,” wrote one redditor. “This is a playbook that they use and it fucking works, which is why they continue to do it.”