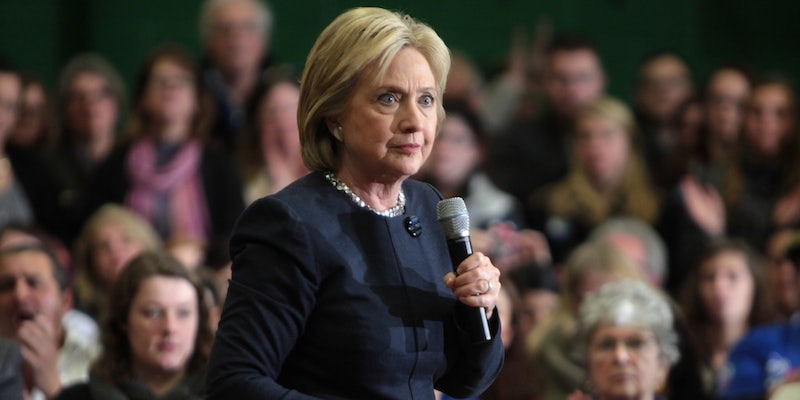 The FBI director said Clinton and her staff were 'extremely careless' for sending classified information.

The Federal Bureau of Investigation will not recommend the Department of Justice bring charges against Hillary Clinton or her staff for mishandling classified material during Clinton’s time as secretary of state despite “extremely careless” handling of top-secret information.

At press conference on Tuesday morning, FBI Director James Comey said that “no reasonable prosecutor” would bring criminal charges against the former State Department employees for their transmission or discussion of classified material over Clinton’s private email setup.

The conclusion of the FBI’s probe into Clinton’s use of private email as secretary of state comes just weeks before the Democratic National Convention, where Clinton is expected to receive the Democratic Party’s presidential nomination.

As many as 2,000 emails were “up-classified,” which means they contained sensitive information that was not classified at the time but were later designated classified by the relevant agencies.

Comey added: “These chains involved Secretary Clinton both sending e-mails about those matters and receiving e-mails from others about the same matters. There is evidence to support a conclusion that any reasonable person in Secretary Clinton’s position, or in the position of those government employees with whom she was corresponding about these matters, should have known that an unclassified system was no place for that conversation.”

The FBI had conducted an “apolitical and professional” investigation, a “painstaking undertaking requiring thousands of hours,” Comey said, that would nevertheless be inundated by political controversy.

Comey’s announcement came on the heels of a three-hour meeting on Saturday between Clinton and federal investigators at the FBI’s Washington, D.C., offices.

The scandal over Clinton’s emails began in March 2015, a few months before she formally announced her bid for the White House. Government investigators said of the 30,000 emails turned over by Clinton’s staff, hundreds are believed to contain classified information, though it remains unclear what number involve Clinton herself, or whether the classification of her emails’ content was incidental in the context of each message.

Comey clarified that the investigation did not involve a single email server, but rather several servers decommissioned at various points in time during Clinton’s tenure at State. The FBI additionally reviewed “several thousand” emails that were not among the 30,000 handed over by Clinton to the State Department. Comey said the cache contained three emails with information classified at the time—two containing “secret” information while another contained lesser “confidential” sources.

Comey noted that Clinton’s staff did not intentionally delete any emails to conceal them from investigators. Like many users, he said, they had simply deleted or archived their work periodically.

In a cursory review last summer of 40 Clinton-server emails by the inspector general of the State Department—a random sample—four reportedly contained classified information. None of the emails were marked classified, but were said at the time of their disclosure to potentially contain intelligence gathered by spy satellites. Other emails were reportedly marked “NOFORN” by the investigators, meaning they should have only be shared among Americans with security clearances.

It was suggested one year ago that the classified details in the Clinton staff emails may be result of “parallel reporting,” which is information received through open source channels that the government incidentally considers secret.

Attorney General Loretta Lynch said on Friday that she intends to accept the recommendation of the FBI. “They’ve had it since the beginning. It pre-dates my tenure as attorney general,” she said of the investigation.

Correction: The number of emails released by the State Department and referenced by Comey was 30,000.