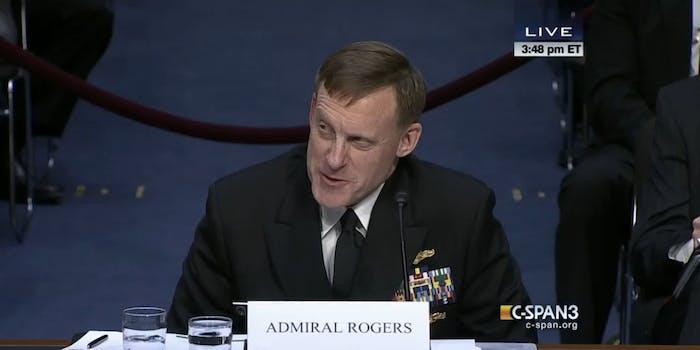 The head of the NSA clearly didn't expect this subject to come up.

When the head of the NSA sat down at a Senate hearing on Thursday afternoon, he probably didn’t expect to become part of the mini-scandal over Hillary Clinton‘s private email server.

That’s exactly what happened when Sen. Tom Cotton (R-Ark.) tried to get NSA Director Adm. Mike Rogers to comment on the security risks posed by a senior government official conducting business through a private email server, as the former secretary of state and current presidential candidate did during her four years in the Cabinet.

“To your knowledge,” Cotton began, “did the State Department ever ask the NSA about the wisdom of setting up a private server so Secretary Clinton could conduct official State Department business?”

“You really want to drag me into this one, sir?”

“I’m not aware of whether they did or they didn’t, sir,” replied Rogers, who only began serving as NSA director in April 2014, long after those decisions were made.

Cotton pressed on. “What would be your response if the current secretary of state or another Cabinet member came to you and said, ‘Admiral Rogers, I’d like to set up a private nongovernmental server and use that to conduct official business?'”

Rogers looked down, smiled for a moment, then looked up at Cotton and asked, “You really want to drag me into this one, sir?”

The NSA director and the rest of the room laughed, as Cotton half-stammered, “I’d simply like your professional opinion.”

Rogers replied that he would advise the Cabinet member to comply with whatever policies governed their department.

Cotton took another swing at the issue, asking Rogers how he would respond if the NSA learned that the Russian or Iranian foreign minister were using a private email server the way Clinton had.

Rogers paused for a moment before saying, “From a foreign-intelligence perspective, that represents opportunity.”

The C-SPAN camera in the hearing room then fortuitously cut to Sen. Dianne Feinstein (D-Calif.), the committee’s top Democrat, who has defended Clinton’s use of a private server. Feinstein appeared to cast a confused or annoyed glance around the room.

When Cotton’s time to question Rogers expired, Feinstein aimed a slight at the conservative senator, questioning “the relevance of that to this committee.”

Thursday’s Senate Intelligence Committee hearing was a rare open session with the head of the National Security Agency. Rogers, like most senior intelligence officials, typically briefs members of Congress in closed-door classified sessions. The open hearing focused on cybersecurity, presenting the perfect opportunity for Cotton, who has repeatedly lambasted Clinton for using a private server, to ask an expert voice to weigh in on the story.

Republicans and many independent security experts have warned that Clinton could have exposed sensitive government data to hackers when she set up her own email system outside of governments networks, which, despite high-profile breaches of their own, remain more secure than private systems.