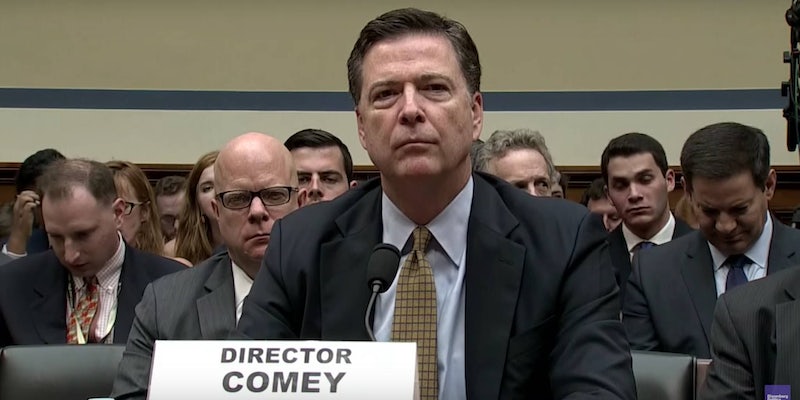 It wasn't just one letter. It was both of them.

One of Hillary Clinton‘s researchers thinks she know why the Democratic nominee lost the presidential election.

Eleven days before the election of 2016, FBI Director James Comey sent shockwaves through the country by informing Congress that the agency had discovered more Clinton emails that needed to be evaluated. Nine days after that (and two days before Donald Trump was ultimately elected president), Comey returned to basically tell us: About those new Clinton emails, um, never mind, nothing to see here.

But at least one member of the Clinton campaign staff thinks the damage by Comey’s letters might have cost her the election—not just the first letter, but the second one that was supposed to absolve her of any wrongdoing, as well.

In an email obtained by Politico, Navin Nayak, the head of Clinton’s opinion research division, told senior campaign staff that events in the final week of the campaign led to Trump’s victory. And Comey’s actions were a big part of that.

“Comey’s letter in the last 11 days of the election both helped depress our turnout and also drove away some of our critical support among college-educated white voters—particularly in the suburbs,” Nayak wrote. “We also think Comey’s second letter, which was intended to absolve Sec. Clinton, actually helped to bolster Trump’s turnout.”

Comey was blasted by critics for sending the letter so close to Election Day.

“It’s aberrational. It violates decades of practice … because it impugns the integrity and reputation of the candidate, even though there’s no finding by a court, or in this instance even an indictment,” one former Justice Department official told the New Yorker.

Clinton campaign chairman John Podesta also wrote that, because Comey was so “vague and obfuscating,” he had “opened the door to conspiracy theories,” more Republican attacks against Clinton, and “a surge of fundraising for Trump.” Nayak wrote the initial letter discouraged Clinton voters, because it made such big news for at least half of the campaign’s final 10 days.

The Clinton campaign did not respond to a request for comment.

Update 2:01pm CT, Nov. 12: On a conference call with campaign contributors on Saturday, Clinton herself said the second Comey letter did more damage than the first, Politico reports.

Clinton said her poll numbers had rebounded days after the first letter was released, but much like Nayak wrote, Trump’s supporters were motivated by the second letter.