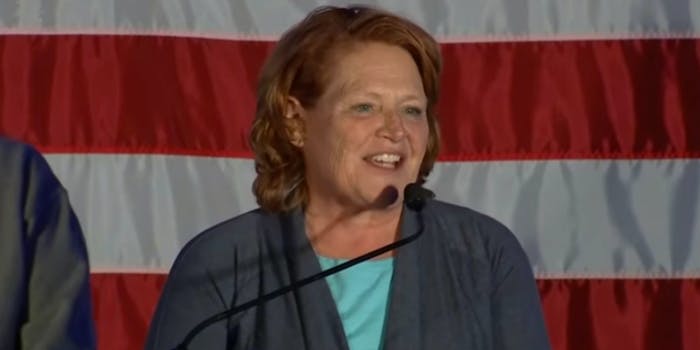 Heitkamp is 'misreading quotes' about Sohn.

The director of a broadband rights organization called out former Senator Heidi Heitkamp for her opposition to FCC Commissioner nominee Gigi Sohn, alleging that Heitkamp is “misreading quotes or taking them out of context.”

Heitkamp, who represented North Dakota in the Senate from 2013 to 2019, is campaigning against President Joe Biden’s nomination of Sohn as FCC Commissioner, calling her the “wrong choice for the FCC and rural America.” After leaving the Senate, Heitkamp founded the One Country Project, a PAC dedicated to “reopening the dialogue with rural communities, rebuilding trust and respect, and advancing an opportunity agenda for rural Americans.”

In the campaign, the organization calls Sohn’s broadband plans wrong for rural America.

In an opinion piece for Broadband Breakfast, a media company focusing on broadband and internet rights, Christopher Mitchell argues that Heitkamp is intentionally misrepresenting Sohn’s quotes to build a case against her. Mitchell—who runs the Institute for Local Self Reliance’s Community Broadband Network Initiative—points to a quote Heitkamp uses in her Medium post where Sohn says, about rural broadband funding: “‘What [have we gotten] for [the federal government’s existing] $50 billion investment? Not much.”

“Is this a sign that Gigi thinks we shouldn’t spend money in rural America?” Mitchell writes. “That is what Heitkamp wants you to believe. But, as Mitchell points out, the quote Heitkamp cites is not the full story. Immediately following the quote, which Sohn gave in an interview with Bloomberg, she says she doesn’t want to continue to build “networks that were for then, and not for now, and not for the future.”

Mitchell points out the hypocrisy of Heitkamp’s dismissal of Sohn, saying Heitkamp is “selling out” to big corporations that have refused to invest in future-proof broadband, and that while North Dakotans won’t be harmed by Heitkamp’s efforts because the state future-proofed its broadband, others will.

“77 percent of the rural areas in the state can connect to the Internet via future-proof, fiber networks, compared to just 20 percent of rural Americans as a whole,” Mitchell writes. “North Dakota broke free of the big monopolies that refused to invest outside of the cities, when local cooperatives and independent telcos bought the lines from those monopolies decades ago to better serve their subscribers.”

Mitchell says he’s known Sohn for many years and she is deeply respected by her opponents and allies alike.

“I want to see Gigi on the FCC for the same reason her opponents do—because she is not the type to sell out for a buck,” Mitchell says. “She is the model for who we need on the FCC.”

A net neutrality advocate, Sohn passed through a Senate committee last month and is now awaiting a full Senate vote. Sohn’s nomination was held up for months by conservatives, who attempt to paint her as an extreme partisan and an “unqualified hack.”

The Daily Dot has reached out to One Country Project for comment.