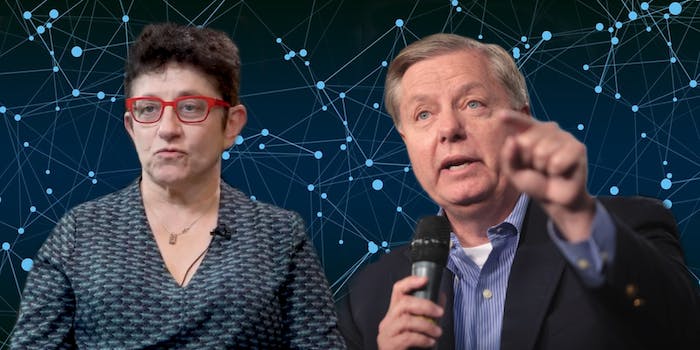 Graham is calling on Republicans to fight the nomination of Gigi Sohn.

In a Twitter thread, Sen. Lindsey Graham (R-S.C.) announced his opposition to one of President Joe Biden’s picks for the Federal Communications Commission (FCC).

Graham urged his fellow Republicans in Congress to block the nomination of Gigi Sohn for commissioner, calling her an “unqualified hack.”

Graham added that “I will do everything in my power to convince colleagues on both sides of the aisle to reject this extreme nominee,” saying that she would be a “complete nightmare for the country when it comes to regulating the public airwaves.”

Graham does not sit on the Senate Commerce Committee, which will hold hearings soon on Sohn’s nomination.

Sohn’s nomination by President Joe Biden came alongside that of current FCC Acting Chair Jessica Rosenworcel, who Biden picked to be permanent chair. Currently, the FCC is deadlocked in a partisan, 2-2, tie. It’s a deadlock Graham himself helped force when he and other Republicans jammed through the nomination of Nathan Simington in the waning days of Donald Trump’s presidency.

In announcing his opposition, Graham shared a link to a Wall Street Journal op-ed that called Sohn a “media censor.”

In it, the WSJ editorial board makes the leap from Sohn tweeting that she thought Fox News was detrimental to society to an intention to actually shut the channel down if she joined the FCC. The editorial also worries about Sohn’s desire to reinstate net neutrality, which it is against. Graham, as a Republican, opposes net neutrality.

Graham vocally rallying against Sohn shows that Democrats need to hold the entire party to get Sohn through.