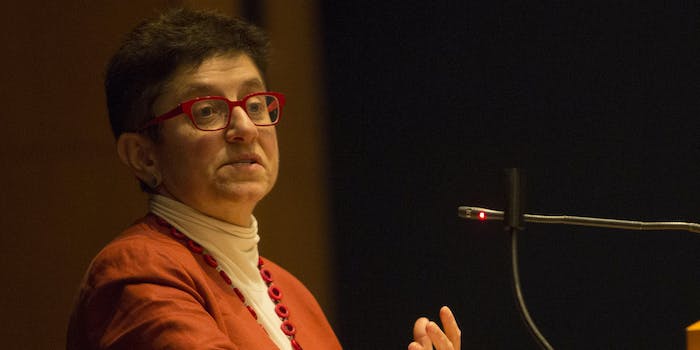 Gigi Sohn passes out of committee, nomination to FCC goes to full Senate

It's been a slow process for Sohn, but it is moving forward.

The Senate Commerce Committee voted 14-14 on Thursday to pass along the nomination of Gigi Sohn to the Federal Communications Committee (FCC). The party-line vote will send Sohn—a longtime net neutrality advocate and President Joe Biden’s pick to fill out the FCC—to the full Senate for approval. It comes after a lengthy, partisan battle just to get her out of committee.

Sohn was nominated in October for a vacant FCC commissioner position, alongside the renomination of Jessica Rosenworcel to Chairwoman, but her road was bumpy. The wait for a confirmation vote took long enough that Biden was forced to re-nominate her in the new year and Republicans were able to force a second hearing.

After passing, Sohn is headed to a vote in the full Senate. If she’s confirmed—which is no guarantee as the Senate is split 50-50—the FCC will have a strong internet rights and privacy advocate among its members.

With Sohn onboard, the FCC is expected to tackle a number of matters of Biden’s telecommunications agenda, including reinstating net neutrality. Sohn has long called for a return of net neutrality, which was repealed by former President Donald Trump’s FCC.

In her confirmation hearings, Republicans painted Sohn as an extreme partisan and an “unqualified hack” and repeatedly brought up ethical concerns from Sohn’s past. Sohn vehemently denied all the allegations, saying that she has been subject to “unrelenting, unfair, and outright false criticism and scrutiny.”

Republicans cited her alleged “bias” for tweets of hers that were critical of Fox News. Then, in January, Sen. Roger Wicker (R-Miss.), the ranking member of the Senate Commerce Committee and a net neutrality opponent, asked for another hearing for Sohn because of “ethical concerns” he had over her ties to Locast, a now-defunct streaming service.

Mark Stanley, the director of operations at Demand Progress, told the Daily Dot that the timing of Wicker’s complaints felt like he was trying to delay the nomination, calling his attempts “dubious” and “cynical.”

Sohn’s confirmation to the FCC would be a huge win for internet rights advocates, who have been pushing for her hard since she was first nominated. Sohn’s position on the FCC could push the commission towards Title II authority over broadband, a designation that will help the FCC enforce strong net neutrality laws.

In an interview with the Daily Dot last year, Sohn said that would be her first order of business for a fully staffed FCC.

Sohn’s confirmation—if it happens—could spark a chain reaction of legislation in the Senate. Sen. Ed Markey (D-Mass.) has repeatedly promised to introduce a net neutrality bill to the Senate once Biden’s FCC was fully staffed.

In a statement today, Free Press Action’s Vice President of Policy and General Counsel Matt Wood praised the vote and called on Sohn to be swiftly approved by the full Senate.

“Today’s vote clears one of the last hurdles to getting [the FCC] to full strength, and giving people the benefits and safeguards they need to connect and communicate in the United States … With Chairwoman [Maria] Cantwell having successfully navigated this tricky process, it’s time for Majority Leader [Chuck] Schumer and the Senate to confirm these highly qualified nominees and let them get to work as soon as possible.”