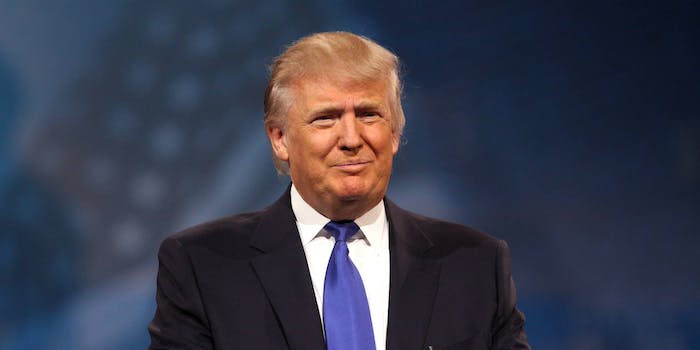 It's a bold, but seemingly lawful, move.

An iconic hacker magazine is offering a $10,000 bounty to the first person who hunts down Donald Trump‘s tax returns.

Trump’s refusal to release his tax returns breaks a decades-old precedent in which all presidential candidates provide the public their taxes for transparency’s sake on business dealings, taxes paid, and overall wealth.

The magazine’s bounty is bold but seemingly lawful, one lawyer said, because the tweet was so carefully worded. Jay Leiderman, a California attorney known for his work defending hacktivists, explains 2600 magazine’s phrasing:

Even so, in that the tweet was carefully worded, I don’t see 2600 having any liability for the solicitation.  Or, in other words, I believe that 2600 acted lawfully.

Monday night’s presidential debate featured a particularly heated moment between Trump and Hillary Clinton in which the Democratic nominee, whose taxes are public, said Trump may be hiding his taxes to exaggerate his wealth, hide tax avoidance, and obfuscate who he does business with.

Trump hit back, saying he’d release his tax returns when Clinton released the 33,000 emails that were deleted from her email server as secretary of state.

2600: The Hacker Quarterly is a 32-year-old publication that’s remained influential among the information security community for decades.

Many cheered its Trump-tax bounty—which is extended to the Republican candidate’s family and campaign staffers—but a few cautioned against the magazine’s move.

2600 took the criticism in stride.

"Sets a dangerous precedent" was our original slogan. https://t.co/sjIQE3y8Gm