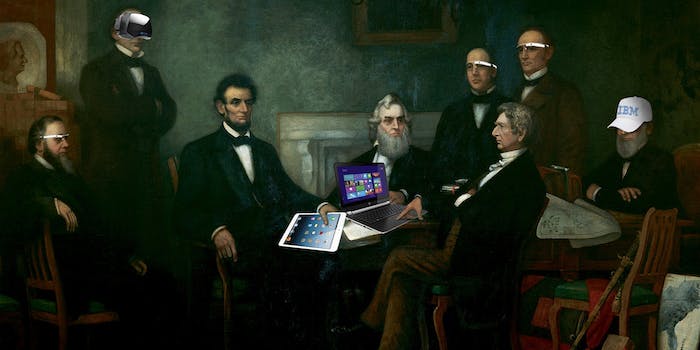 Politians are in a new gold rush out West for campaign contributions.

Silicon Valley may be 3,000 miles away from Washington, D.C., but politicians are increasingly willing to make the long flight out to California to try to grab a share of the billions of dollars that freely flow through the tech industry.

With President Barack Obama attending a $1,000-a-plate fundraiser hosted by the CEO of Yahoo in May, and Napster cofounder Sean Parker’s plans to invest big in the upcoming midterms, it’s clear that tech industry magnates and their considerable checkbooks are now a substantial political force. But who are the biggest political players in Silicon Valley, and in which direction are they trying to make the political winds blow?

How blue is the Valley?

From watching the characters in HBO’s Silicon Valley, one might naturally assume that the tech industry, with its dorm room-like atmosphere and youthful startup culture, leans more Democratic.

That conception is not without merit, and it was further reinforced this week by the news that Marissa Mayer, the CEO of Yahoo, would be cohosting a pricey fundraiser at a Palo Alto, Calif., startup incubator for the Democratic National Committee (DNC) in May, which the president attended. More than 200 people were expected to attend, paying a minimum of $1,000 just to be in the same room as the commander-in-chief. And this is hardly Mayer’s first foray into politics. She’s a longtime contributor to Democratic politics, having previously hosted a $30,000-per-person fundraiser for the Democratic National Committee back in 2010.

We also found out recently that Parker, the man who cofounder Napster and then used his fortune to help turn Facebook into the social behemoth it is today, intends to become more active in political financing. His plans are still somewhat amorphous, according to Politico, but he has hired the former chief-of-staff of California’s Democratic Lt. Governor, Gavin Newsom, to run his political operations. In the past, Parker has donated almost exclusively to Democratic candidates, including more than $30,000 to Obama’s reelection campaign in 2012.

Overall, tech industry leaders seem to favor Democrats. In addition to Mayer and Parker, the Democrats have received substantial monetary support from the likes of Facebook COO Sheryl Sandberg and LinkedIn cofounder Reid Hoffman. And despite vocal condemnation of the two-party system, Google cofounder Sergey Brin has tended to favor the Democrats over the Republicans when voting with his pocketbook.

If there is a Democratic bent in Silicon Valley, it’s further evidenced by the donations of rank-and-file tech firm employees, which during the 2012 election strongly favored Obama over Republican Mitt Romney across the board.

Tech companies outside Silicon Valley favored the president and his party, as well. Roughly 81 percent of contributions from employees of Microsoft, based in Redmond, Wash., went to Obama. Even workers at IBM, a century-old technology company as far removed from scrappy startup world as possible, favored the president with 77 percent of their donations.

This is not only giving Democrats a fundraising advantage, Silver also speculates that Obama and his Democratic allies also reap the rewards of better online campaign tools because they have a larger pool of tech industry talent from which to draw.

There’s plenty of evidence to suggest that Silicon Valley Republicans come from the more libertarian wing of the party. For instance, Obama wasn’t the only one to out fundraise Romney among Silicon Valley workers. Ron Paul, the former Texas congressman and the face of a libertarian resurgence dubbed the ReLOVEution, raised $17,000 more from Google employees than Romney—a feat made even more impressive by the fact that Paul was not in the race as long.

Internet culture has long been a haven for people who believe in meritocracy, free markets, and a minimalist government. Libertarian philosophy drove the infamous Silk Road black market, and libertarian candidates were among the first to embrace Bitcoin as a form of campaign contributions.

There are also a number of notable Silicon Valley executives who have contributed to Republican campaign efforts—many of whom made their fortune with ecommerce sites.

Steve Ballmer, CEO of Microsoft, has given to some Democratic candidates, but most of his money has gone to Republicans. He was also a supporter of George W. Bush during his reelection campaign.

The only notable Silicon Valley figure to run for high office was Meg Whitman, president and CEO of Hewlett-Packard. She sought, unsuccessfully, to become the governor of California in 2010, supporting issues like the Prop 8 amendment that banned same-sex marriage in that state. She has since reversed her opinion on the issue but continues to contribute to Republican candidates.

The leanings of one of Silicon Valley’s most emblematic figures, Facebook founder Mark Zuckerberg, have been a little harder to nail down. Through the 2012 campaign, he limited his personal donations to Facebook’s political action committee, which has disbursed funds to candidates in both parties. Zuckerberg was friendly with Obama on the campaign trail, but recently he hosted his first-ever political fundraiser for New Jersey Republican Gov. Chris Christie, a 2016 presidential hopeful.

But like technology itself, the political opinions of Silicon Valley’s deep-pocketed benefactors can change over time. There are rumors that Parker’s midterm contribution surge will spread the wealth to candidates in both parties. According to Politico, he intends to “aid Republicans he views as credible deal-makers in a bitterly divided Congress.”

It’s not just politicians who are flying out west with their palms outstretched. As Washington takes more and more interest in Internet policy issues, a number of large Silicon Valley firms have set up PACs and lobbying firms in the nation’s capitol to try and influence legislation.

In 2013, 10 tech firms spent a combined $61.2 million trying to influence federal policy. Spending by the top 10 tech lobbyists increased 16 percent over 2012. The biggest Washington influencers include some of Silicon Valley’s largest companies, like Apple, Intel, Oracle and Amazon.

But even smaller lobbying efforts are having an impact. Spending several hundred thousand dollars, Netflix was able to get Congress to overturn an arcane 1980s law that prohibited its users from sharing their viewing history on social media.