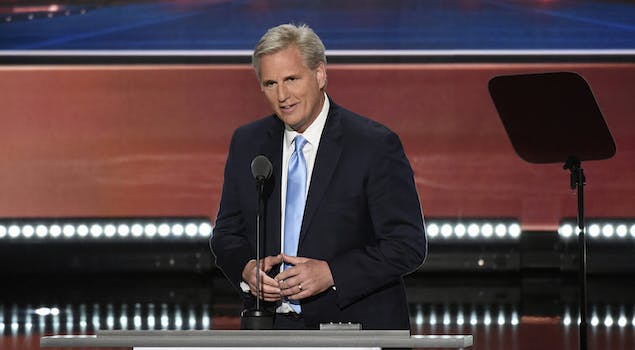 Majority Leader Kevin McCarthy posted this tweet AFTER a bomb was sent to Soros' house. Up until a couple of minutes ago it was pinned to the top of his profile. pic.twitter.com/FEeKoPolHL

The tweet refers to a long-running conspiracy theory that Jewish people secretly run the world; all three billionaires are Jewish. And it was posted, as Slate points out, after a pipe bomb was found on Soros’ property. Steyer later also received a pipe bomb, allegedly from Cesar Sayoc, whose social media was a rash of conspiracy theories about Soros, Hillary Clinton, and other prominent Democrats.

Other politicians have tweeted similar conspiracy theories; Rep. Matt Gaetz (R-Fla.) has also used social media to push harmful, unproven theories. For example, Gaetz floated the theory that Soros was somehow funding the caravan of refugees coming from Honduras and making its way to the southern U.S. border.

“BREAKING: Footage in Honduras giving cash 2 women & children 2 join the caravan & storm the US border @ election time. Soros? US-backed NGOs? Time to investigate the source!” Gaetz tweeted. He later acknowledged that the footage was not from Honduras, but did not take down the tweet. It has 44,597 retweets and 56,920 likes as of this writing.

Members of the right-wing media have helped to spread conspiracy theories against Soros, too. Erick Erickson, the conservative blogger, has said that Soros funded the caravan to influence the midterm elections. And a commentator on the Fox show Lou Dobbs Tonight claimed without evidence that “the Soros-occupied State Department” funded the caravan. Fox has apologized and said it will not air the episode again.

The president, who tweets baseless rumors and conspiracy theories regularly, speculated during the Kavanaugh hearings that some of the protesters—particularly the women who stopped Jeff Flake in an elevator to tell him about their stories of assault—were funded by Soros.

The very rude elevator screamers are paid professionals only looking to make Senators look bad. Don’t fall for it! Also, look at all of the professionally made identical signs. Paid for by Soros and others. These are not signs made in the basement from love! #Troublemakers

Sen. Chuck Grassley (D-Iowa) later agreed with the idea that Soros was funding the protesters. “I believe it fits into his attack mode that he has and how he uses his billions and billions of resources.”

Anti-Semitic attacks were up 57 percent last year, according to Jonathan Greenblatt, the director of the Anti-Defamation League. He attributes the spike in attacks to the anti-Semitic rhetoric—both subtle and overt—some members of the Republican party have embraced in the age of Trump.

“We are seeing an environment where anti-Semitism has moved from the margins into the mainstream, where political candidates and people in public life now literally repeat the rhetoric of white supremacists,” Greenblatt told Mother Jones. “It’s normal and permissible to talk about Jewish conspiracies manipulating events, or Jewish financiers somehow controlling activities, and that is awful.”

Other Congressional representatives have spread conspiracy theories about Soros and engaged in more blatant anti-Semitism. Rep. Steve King (R-Iowa) has talked about Soros on social media, and has met with far-right groups in Europe several times. He also endorsed an anti-Semitic candidate for mayor of Toronto.

And, while his political relevancy is increasingly questionable, former New York City mayor Rudy Giuliani jumped in on the Soros hate as well, retweeting a tweet that called Soros “the anti-Christ.”

Rep. Devin Nunes (R-Calif.) has spread conspiracy theories about Soros online, too. After an employee from American Bridge, a progressive super PAC, was fired for grabbing the arm of a campaign staffer for Nevada Attorney General Adam Laxalt, Nunes spoke about how the group is funded by Soros. Soros is one of many contributors to the super PAC, but Scalise and Nunes singled Soros out, with Nunes going so far as to call the staffer “a Soros-funded hack.”

In the wake of the mass shooting at the Tree of Life synagogue in Pittsburgh, Pennsylvania, on Saturday, as well as the pipe bombs sent to Soros, Steyer, and a dozen other prominent Democrats, none of the lawmakers apologized for spreading unfounded, Soros-based and anti-Semitic conspiracy theories on social media.