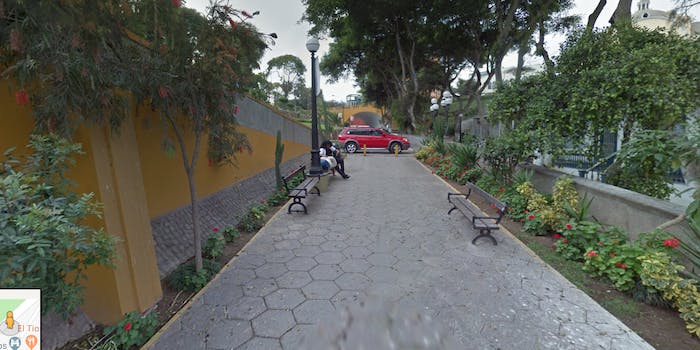 In a bizarre “what are the chances” tale, a Peruvian man and woman reportedly divorced after the husband caught his wife cheating. The strange part is how the man spotted the infidelity: on Google Street View.

According to the Daily Mail, the man was looking up directions to a popular bridge in Lima using Google Street View when he came across a still of a woman, whose face was blurred, sitting on a bench with a man’s head in her lap. The Googling man recognized the woman’s outfit—then recognized her as his wife.

The photos, snapped by Google Street View cameras back in 2013 at the Puente de los Suspiros de Barranco (or the Bridge of Sighs of the Ravine), showed the woman stroking the man’s hair. The duo was sitting at a popular vista point in the city, so Street View coverage of the area is quite extensive.

The Peruvian man, understandably upset, confronted his wife, and she admitted to having had an affair. Local reports suggest the couple has since divorced.

Google Street View has caught a variety of unusual moments since it debuted in 2007, including a Saran wrap prank caught in progress,  a rogue frog on a camera lens, and people inexplicably wearing animal masks. If you’re in the Halloween mood, there’s even a collection of super spooky locations and glitches you can check out on Street View.

On Reddit, a number of users likened the Lima ex-couple’s saga to an episode of Black Mirror, while others wondered about the future capabilities of Echo devices and whether they could one day accidentally reveal instances of infidelity, as well.

While this particular man was unfortunate to discover his wife’s affair via Google Street View, hopefully he’s happier now—or at least in a better relationship.