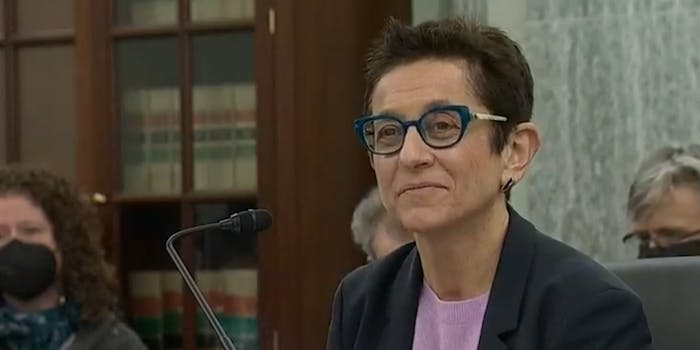 The decision to have another hearing after weeks of delays is being criticized.

The Senate Commerce Committee on Wednesday announced that it scheduled a second confirmation hearing for Gigi Sohn, President Joe Biden’s pick to be the fifth commissioner at the Federal Communications Commission (FCC).

The decision has had immediate ramifications, with one prominent internet rights group calling for her to be removed as the chair of the committee over caving on “disingenuous opposition from Republicans and industry lobbyists” and “inexcusable delays” in Sohn’s confirmation.

The second hearing is just the latest delay in her nomination process. The announcement comes after Republicans have relentlessly obstructed Sohn’s nomination since her first confirmation hearing late last year.

They first painted her as an extreme partisan despite numerous right-wing networks endorsing her, and more recently they’ve brought up “ethical concerns” because of her involvement with an app that allowed people to stream over-the-air programming that was sued and subsequently shuttered.

The commerce committee did not vote on Sohn’s nomination before the end of last year, forcing Biden to re-nominate her in January.

After pressure from public interest groups earlier this year, Sohn was scheduled to have a vote yesterday. But the vote was pulled after Sen. Ben Ray Luján (D-N.M.), one of the 14 Democratic senators on the committee, suffered a stroke. Luján is expected to make a full recovery.

Since the makeup of the Senate Commerce Committee is evenly split between Democrats and Republicans, attempting a vote without Luján risked Sohn not getting the necessary votes to advance from the committee to the full Senate. Sohn’s next confirmation hearing will be Feb. 9.

On Wednesday, Sen. Maria Cantwell (D-Wash.), the chair of the Senate Commerce Committee, told Communications Daily that the second confirmation hearing for Sohn was needed because some Republicans on the committee were “talking about not showing up at all” to Sohn’s scheduled vote today. She added that the second hearing would be about “whatever questions people have” about her.

The nomination of Sohn, who has drawn rave reviews from public interest groups and been endorsed by a long list of organizations, is extremely important. If confirmed, she would give the FCC a 3-2 Democratic majority for the first time in Biden’s presidency. That majority would allow the FCC to tackle a number of issues, such as restoring net neutrality rules and the agency’s authority over the broadband industry.

Telecom industry lobbyists told the Washington Examiner in December that they hoped to delay Sohn’s nomination to keep the FCC in a deadlocked 2-2 partisan tie.

The situation, from Republican obstruction to Cantwell’s decision to hold another hearing, was met with blistering criticism.

“Since her nomination back in October of last year, Ms. Sohn has reached out to meet with every member on the Commerce Committee; she fielded all questions members asked of her during a nomination hearing; and she responded to questions members had, including the specific question that would be the subject of this hearing,” Chris Lewis, the president and CEO of Public Knowledge, said in a statement. “To be clear: The hearing scheduled for next Wednesday seems like nothing more than an opportunity to give these baseless concerns raised by industry an opportunity to hobble the appointment of a consumer champion to the commission.”

Meanwhile, Fight for the Future sent a letter to Senate Majority Leader Chuck Schumer (D-N.Y.) calling for Cantwell to be removed as the chairwoman of the Commerce Committee.

In its letter, the group’s Director Evan Greer notes that Cantwell’s decision “inexcusable” and that she “caved to disingenuous opposition from Republicans and industry lobbyists.”

“Given the circumstances, we call on Senate Leadership to immediately remove Senator Maria Cantwell from her position as chair of the Senate Commerce Committee. She has proven herself to be more interested in pandering to the broadcast and telecom industry and their Republican enablers than fulfilling Democrats’ promise to restore net neutrality and a functioning FCC,” the letter reads.

The Republican gripes with Sohn stem from her involvement with Locast, a streaming service that allowed people to watch over-the-air television. During her confirmation hearing, Sohn said she felt like the service allowed for low-income and underserved portions of the country to get access to television programs.

Locast was sued by networks like ABC, NBC, CBS, and FOX, alleging that it violated copyright law. Last year, a judge ruled in favor of the networks and a settlement was agreed to. Sohn joined the board of Sports Fans Coalition, the non-profit that ran Locast, after the lawsuit was filed.

Last month, Sen. Roger Wicker (R-Miss.), the ranking member of the committee who has blocked numerous attempts by Democrats to force a vote on a popular net neutrality bill, used the settlement with Locast as a reason for having a second confirmation hearing, saying that he had “ethical concerns” with Sohn. Cantwell granted that request on Wednesday.

But Sohn was asked about it numerous times during her first confirmation hearing and in follow-up written questions from lawmakers following the hearing. Recently, Sohn agreed to recuse herself from some matters that might come before the FCC.

Lewis called the decision to hear from Sohn again “senseless,” but suggested that if Sohn testified more about Locast she could withdraw her recusal letter, creating a “modicum of benefit” from the process.

“The only story here today ought to be Sen. Luján’s absence and his road to recovery. His health is the priority, but news of his absence from Congress creates an unavoidable delay because of the irrational partisan posturing in D.C. politics,” Free Press Action Vice President of Policy and General Counsel Matt Wood said, adding: “As a result, we have to deal with Senator Wicker’s disingenuous and blatant obstructionism over this crucial nomination. And with Senator Cantwell caving to unreasonable demands from opponents to Sohn, we’re going to see a hearing full of political posturing that serves no one except industry players eager to draw out the calendar and keep the FCC deadlocked.”

Wood also aimed criticism at Cantwell for deciding to schedule a second hearing at all.

“There is plenty of blame to go around for this situation, with the White House’s indecision and delays last year, and Senator Wicker’s continued opportunistic nonsense. It’s not yet clear whether Chairwoman Cantwell is participating in that obstruction or just wildly ineffective at countering it,” Wood said. “But her failures to move ahead on this tremendously well-qualified nominee are outrageous.”