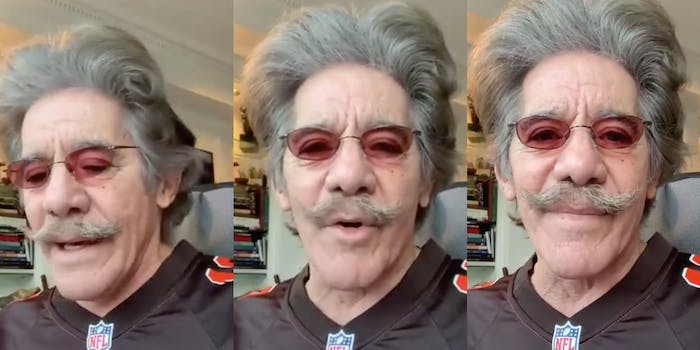 'Then he lost the election. It made him crazy or revealed a dysfunction I had refused to see.'

The next person off the Trump train: Geraldo Rivera. The longtime Fox host and analyst and friend of President Donald Trump has decided to jump ship, saying Trump “should be impeached” while demonizing him on Twitter. For doing so after ardent support, Rivera is getting roasted online.

Perhaps realizing he would be directly tied to Trump, Rivera has been flooding social media with calls for the president’s impeachment. The newsman cites Trump’s actions and inactions specific to last week’s U.S. Capitol insurrection, essentially suggesting the moral cut-off for his support of the president was precisely armed insurgence by an angry white mob.

But Rivera has been wildly inconsistent in his messaging. On Monday, he was heavy-handed with the concept that impeaching Trump was a grand mistake.

“It will fail, impeachment, it will divide us,” he claims, not citing who “us” implies. “There’s no upside for the country in dragging the battered nation through another profounding divisive impeachment. Why do that just nine days left in Trump’s term? Let history judge him, not partisans who care more about headlines than justice. Impeachment is the new nuclear option.”

Even on Tuesday, he writes: “Impeachment is as inevitable as #DonaldTrump’s eventual acquittal. The net result will be more division on a nation already torn asunder.”

Then, the flip begins to show and he begins to recede into the bushes like Homer Simpson: “Don’t Impeach Trump unilaterally. #Censure him unanimously.”

Finally, again, with the same day, and inside of 24-36 hours of the initial downplaying of the value in impeaching Trump, Rivera’s suddenly on the clout chase.

Says Rivera: “A loyal friend, hounded without mercy by Democrats intent on destroying him from Day 1. Then he lost the election. It made him crazy or revealed a dysfunction I had refused to see. He then unleashed a mob to make war on their own government. 5 to their doom. @LizCheney is right.”

It “revealed a dysfunction” Rivera also could not see just earlier in that same day.

Now on Wednesday, Rivera is a brand-new man, stating, “#DonaldTrump should be Impeached. He should know history is judging him whether or not he is convicted and removed from office. He should also apologize to the families of those who lost their lives. His actions were inexcusable & undeniable. This time, he did it.”

Rivera’s attempt to back up from the entropy and fundamental devolution of the Trump administration he personally helped prop up (and profited from on TV) is getting ridiculed online with memes for being craven and outrageous.

As @middlechild91 tweeted of Rivera: “You really take the cake. I have read every Trump defense tweet you have sent out. You do not get a do over now that you have ‘seen the light.'”