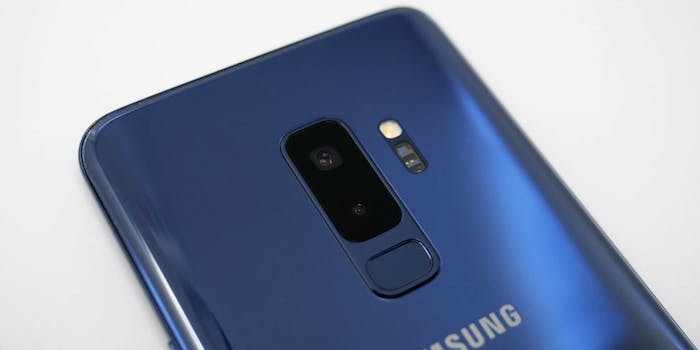 The deal does not impact the S9 on other carriers.

Just when you thought Yahoo would join Myspace and AOL in the ranks of irrelevant services we’ve all forgotten about, the once-popular search and email client was given an injection of life by Verizon and an unlikely ally.

When the deal finalizes, Oath will become the “premiere content provider” for Bixby, Samsung’s Siri competitor nobody wants. To add insult to injury, Verizon will place ads in the middle of the news feed—one swipe away from the homescreen—and split profits with Samsung each time a user presses on them.

“The amount of content consumption on phones is continuing to skyrocket and I think brands and consumers want more high-quality content,” Oath’s CEO Tim Armstrong told Reuters, failing to consider the means by which people want to digest that content.

The goal for Verizon, which recently bought Yahoo and merged it with AOL to form digital media division Oath, is to put its new in-house content and any accompanying advertisements where they can’t be ignored. The agreement with Samsung is sure to spark criticism from those who see it as a user-hostile approach to prioritize content based strictly on the flow of capital between two companies. As Gizmodo points out, Verizon shamelessly puts the Galaxy S9 on top of its list of the “5 best Android phones from Verizon,” a ranking that can (and should) be interpreted as an advertisement.

For Samsung, the deal will be viewed as a step backward by critics and customers alike. The company has long been criticized for loading its devices with “bloatware,” or pre-installed applications, especially when compared to the streamlined experience offered by Apple and Google. Bloatware isn’t just a visual annoyance, it can also drain your battery or eat up storage when it runs in the background. Android users can generally uninstall unwanted apps, but some bloatware can’t be removed. Alternatively, users can go into their settings and disable apps so they don’t operate behind the scenes, but not everyone knows how to do this.

Samsung needs to be careful about how its new revenue streams affect the user experience of its devices, especially flagship phones like the Galaxy and Note line. The company is putting itself back in the hot seat after only recently escaping with its reputation intact post-Galaxy Note 7 disaster. With competition in the smartphone industry heating up, one slip may be all it takes.

Fortunately, the deal between Samsung and Verizon will not impact unlocked versions of the Galaxy S9 or those sold by other carriers. Therefore, if you’ve settled on the Galaxy S9 and are willing to jump ship, you can always go to AT&T, T-Mobile/Sprint, or a less expensive MVNO. If you’re stuck with Verizon and aren’t into the excellent Pixel 2 or LG V30, we recommend you buy an unlocked version of the Galaxy S9 at full price.

We have reached out to Samsung to see whether the Yahoo/Oath apps can be uninstalled. We will update this article if we hear back.