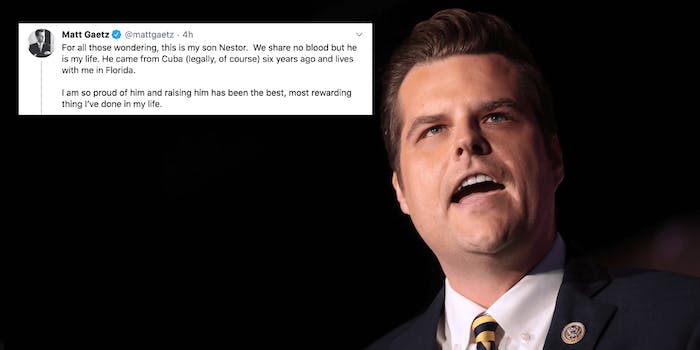 The politician revealed the young man's existence on Twitter.

Rep. Matt Gaetz (R-Fla.) unveiled to the world on Wednesday a young man he claims to be his adopted son from Cuba.

The conservative politician, who tweeted out a photograph of himself and his alleged son Nestor Galban, dropped the news one day after getting into a heated debate with Rep. Cedric Richmond (D-La.).

Richmond had suggested that Republicans were unaware of what it was like to worry about the safety of a nonwhite son, seemingly prompting Gaetz to use Galban as proof of otherwise.

“For all those wondering, this is my son Nestor. We share no blood but he is my life,” Gaetz said. “He came from Cuba (legally, of course) six years ago and lives with me in Florida.”

“I love you, keep up the good work, we all support you and love you!” @galban_nestor tweeted.

Erin Gaetz, the politician’s sister, also weighed in on the matter by noting that Nestor had allegedly arrived in the US at the age of 12 and had recently finished high school.

Erin went on to share numerous videos and pictures of Gaetz and Nestor doing everything from playing with a football to spending Christmas together.

But the internet wasn’t entirely convinced. Many began digging for clues and questioned the mysterious relationship.

A video began circulating online from late 2017 showing Gaetz referring to Galban as his “helper” and not his son.

Galban was also featured in a photo posted to Gaetz’s official Facebook page in 2016 in which he and one other teenager were referred to as two “local students.”

Despite the posts, it seems the secrecy and odd references to Galban were not without reason.

Galban went on to state on Twitter Thursday that he purposely kept his relationship with Gaetz a secret in order to protect his childhood.

“I wanted as a secret before because I wanted to have a normal life without any of y’all getting in it,” he tweeted. “But now I’m 19 and I old enough to handle it.”

Ex-Democratic Congresswoman Katie Hill, who described Gaetz as an unlikely friend, likewise stated that Galban had been kept secret for his own safety.

“Also he was never ‘hiding’ his son. He was trying to protect him from the crap that comes from being a politician’s kid, esp after what Nestor had been through, esp in this political climate,” she tweeted. “Now that Nestor is grown he’s made his own choice to enter the spotlight. Good for them.”

Galban also referenced Gaetz as his father in response to jokes about the revelation.

“Matt is the best dad/mentor anyone could ever ask for, he has taught me a lot, and I’m thankful to have him in my life,” Galban said.