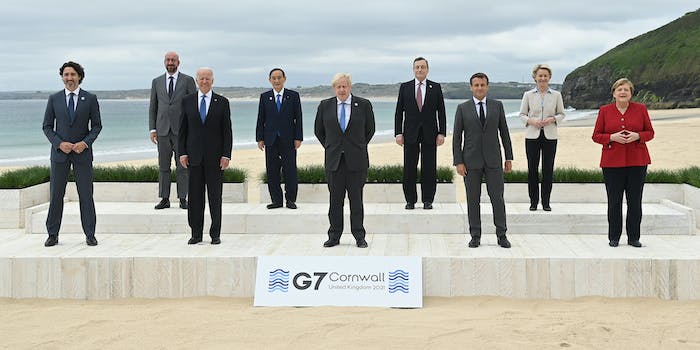 Many felt that the picture bears an uncanny resemblance to a still from a superhero movie.

On Friday, world leaders gathered in Cornwall, England for the first major international summit since the COVID-19 pandemic. The Group of Seven (G7) summit will include a pledge for 1 billion vaccine shots for the world.

Naturally, before getting down to business, the world leaders—from the United States, United Kingdom, France, Italy, Japan, Canada, and Germany, as well as representatives from the United Nations and European Union—posed for a group photo. The group was photographed standing on an elevated platform on the beach, each at a distance from one another.

Judging by the reactions, the so-called “family photo” is the funniest thing the internet has seen in a minute.

Many felt that the picture bears an uncanny resemblance to a still from a superhero movie, or the moment just before the cast of a musical bursts into song.

“This just looks like G7 action figures,” joked Cybil Wallace, the senior editor for Goodreads. “If you sell some on Etsy I’m in,” CNN’s Jake Tapper replied.

Much like when the last United States president had a hissy fit and stomped off to North Korea during the 2018 G7 summit exactly three years ago, this G7 image launched a meme party, albeit a more light-hearted one.

The G7 summit will continue through Sunday. Australia, South Africa, India, and South Korea have also been invited to participate in the talks, which are expected to focus on the pandemic, climate change, and economics.

The group is not expected to discuss filming a sequel to The Eternals or yet another installation of the X-Men or Avengers series.