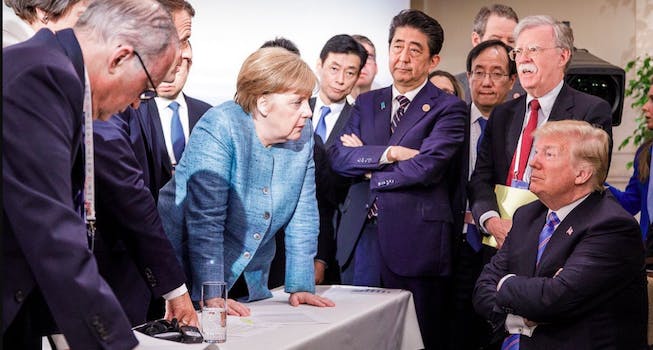 They took him down to meme town.

This weekend, President Donald Trump cemented his stance as the Western world’s most petulant president, ditching the G7 summit to hang out with a North Korean dictator, and tweeting angrily on his way out the door.

Based on Justin’s false statements at his news conference, and the fact that Canada is charging massive Tariffs to our U.S. farmers, workers and companies, I have instructed our U.S. Reps not to endorse the Communique as we look at Tariffs on automobiles flooding the U.S. Market!

After reportedly agreeing on the wording of a joint statement, Trump backed out of it after he left, enraging American allies like Germany and France.

Trump continued the tirade on his way to meet Kim Jong-un.

Fair Trade is now to be called Fool Trade if it is not Reciprocal. According to a Canada release, they make almost 100 Billion Dollars in Trade with U.S. (guess they were bragging and got caught!). Minimum is 17B. Tax Dairy from us at 270%. Then Justin acts hurt when called out!

….Germany pays 1% (slowly) of GDP towards NATO, while we pay 4% of a MUCH larger GDP. Does anybody believe that makes sense? We protect Europe (which is good) at great financial loss, and then get unfairly clobbered on Trade. Change is coming!

The rift between Western Europe and America frightened observers, as one stated goal of Russian President Vladimir Putin has been to undermine the NATO alliance that’s stood in opposition to Russia since World War 2.

Two of Putin's goals are to interfere with democratic elections and to divide the western alliance. It appears as if his designated agent in the White House is assisting at every turn.

Russia has dreamed for decades of splitting the US from its allies. Trump is doing it. https://t.co/oNlzeJVnHs pic.twitter.com/WjYB0ldnfW

And while that’s a bit frightening, it led to a few good tweets (which honestly in this day and age is all we can ask for).

“Just tell us what Vladimir has on you. Maybe we can help.” pic.twitter.com/DLc7YJFXqT

Trump is notoriously independent, so it’s unlikely he would ask for help. But the image over a glowering Merkel swiftly became a meme.

My God, this G7 is producing a hell of a set of images.
Has Angela Merkel placed Trump on the naughty seat? pic.twitter.com/yMIJr1nE1U

Anyone is having a better weekend than Angela Merkel right now. #G7Summit pic.twitter.com/K9QmWxHxaP

It got so popular that even Angela Merkel, Germany’s chancellor, posted it to Instagram.

Looks like the EU won this round, at least from an internet perspective.