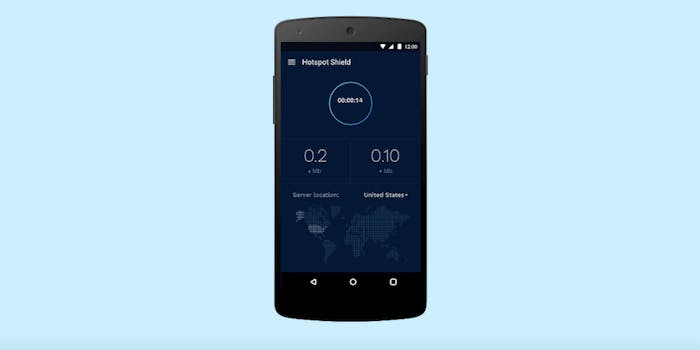 It's all in the fine print.

At this point, we should all know that nothing on the internet is free: If a service isn’t directly charging you for its services or monetizing through clicks or advertising, your data is the cost. And while you may think your browsing habits are secure if you’re using a virtual private network (VPN), that’s not necessarily the case for free VPN users.

According to the Next Web contributor Nathan Resnick, several popular free VPN services may be selling your data to third parties.

A VPN masks your IP address behind a virtual one and routes your web traffic through a different location. It provides an extra layer of web browsing security, allowing you to overcome firewalls or letting you access geo-restricted content. There are a number of paid VPN providers, but there are also some free options.

Apparently, some popular names, while hiding your location, aren’t necessarily keeping all of your data private. Hotspot Shield, Hola, and Betternet are three such providers, but a full list of VPN services that allow for selling your data in their privacy policies can be found here.

The app also disclosed other sensitive information, including wireless network names and identifiers such as device serial numbers.

Hola explains in its privacy policy that it “may share anonymous information with third parties” and that your email address may be shared with marketing partners.

It also recently came to light that a number of top VPNs were tracking user behavior. Data collected—but not necessarily sold to third parties—included names, phone numbers, and email addresses, as well as the type of device being used, the IP address, and bandwidth usage stats.