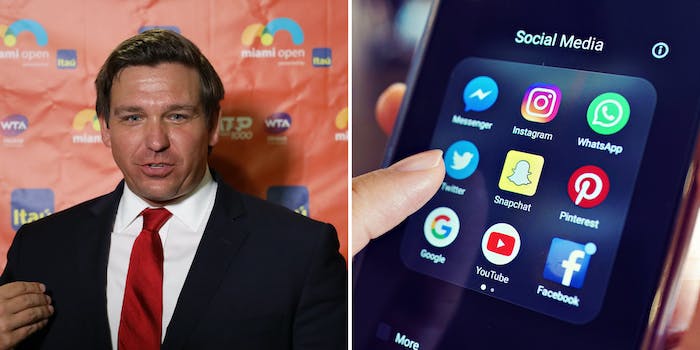 'Neither law nor logic recognizes government authority to strip an entity of its First Amendment rights merely by labeling it a common carrier,' the court wrote.

A Florida law that would have allowed politicians to sue social media platforms if they were banned was struck down by the 11th Circuit Court of Appeals on Tuesday, just hours before it was set to go into effect.

The court sided with a lower court ruling that said social media companies were their own private actors, therefore their actions aren’t prohibited under the First Amendment, according to the Washington Post. A three-judge panel penned a 67-page opinion unanimously rejecting the legal justification for the law.

“Neither law nor logic recognizes government authority to strip an entity of its First Amendment rights merely by labeling it a common carrier,” the court wrote in its opinion.

Some of the law’s provisions were not struck down by the court, including allowing individuals banned from social media platforms to access their data for up to 60 days.

Florida’s “Big Tech Bill” was signed in May of last year and enforced a $250,000 fine per day against social media companies that banned a state politician or candidate for office from their platforms. The law also allowed room for the state to sue social media platforms if it felt they were censoring or “shadow banning” candidates.

When the bill was signed, Florida Governor Ron DeSantis said the law was to ensure “real Floridians” are protected against “Silicon Valley elites,” and said social media companies would be held accountable if they chose to “discriminate in favor of the dominant Silicon Valley ideology.”

It was almost immediately met with a lawsuit from NetChoice and the Computer & Communications Industry Association, whose members include tech giants like Apple, Meta, Google, and Twitter.

“The act discriminates against and infringes the First Amendment rights of these targeted companies, which include plaintiffs’ members, by compelling them to host—and punishing them for taking virtually any action to remove or make less prominent—even highly objectionable or illegal content, no matter how much that content may conflict with their terms or policies,” the suit said.

Right-wing politicians have grown increasingly hostile toward social media companies, claiming they are often censored or removed from the platforms in a violation of their free speech rights. A Texas law that bears a striking similarity to the struck-down Florida law was passed last year, which allows users themselves to sue social media companies over censoring or banning them. The Texas law attempts to classify social media platforms as “central public forums” that are therefore subject to the First Amendment prohibitions on restricting free speech. The law was put on hold when it passed but was reinstated earlier this month. It is also being challenged in court.

Supreme Court Justice Clarence Thomas has called social media companies “common carriers” and has said they should be subject to similar regulation as telecommunications companies, an argument the 11th Circuit rejected.

Social media censorship has been a topic of debate in recent months after Elon Musk entered into an agreement to purchase Twitter for a reported $44 billion. Musk has railed against Twitter’s free speech policy, saying by limiting speech the platform is “failing to adhere to free speech principles” and “fundamentally undermines democracy.” Musk has also criticized Twitter for banning former President Donald Trump in the aftermath of the Jan. 6, 2021 insurrection and said he would reinstate Trump if his takeover bid is successful.