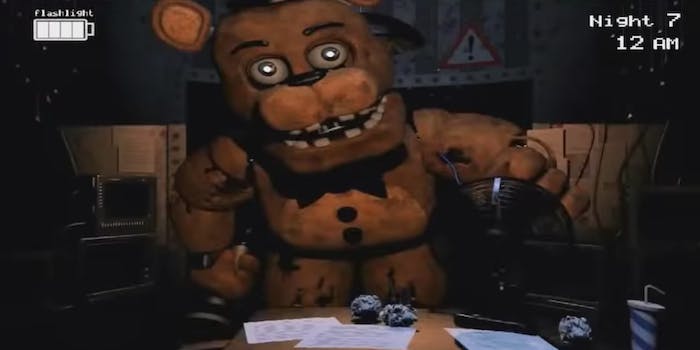 'If people think I'm doing more harm than good now, then maybe it's better that I get cancelled and retire.'

The creator of the popular video game Five Nights at Freddy’s is facing criticism online over donations made to conservative politicians.

Cawthon received significant pushback from the LGBTQ community as well for donations to “some of the most anti-LGBTQIA+ conservatives in America.”

After several days of silence, Cawthon on Saturday responded to the controversy in a post on Reddit.

“To say that the last few days have been surreal would be an understatement,” Cawthon wrote. “I’ve debated greatly how best to address this, including not addressing it at all, but with so many people from the LGBT community in the fanbase that I love, that’s not an option.”

Cawthon pushed back on the criticism by asserting that he had given support to both Republicans and Democrats over the past several years.

“For those who took the time to look, you saw that the candidates I supported included men, women, white people, black people, republicans, and democrats,” he wrote.

After citing his donations to former presidential candidate Rep. Tulsi Gabbard (D-Hawaii), Cawthon went on to defend his support of Trump.

“Even if there were candidates who had better things to say to the LGBT community directly, and bigger promises to make, I believed that their stances on other issues would have ended up doing much greater harm to those communities than good,” he said. “All of this explanation, I fear, is wasted, as people don’t want to discuss with one another anymore; they want endless apologies and submission. People who are expecting those from me will get neither.”

Cawthon also declared his stance as a staunch pro-life Christian who believes “in equality, and in science, and in common sense.”

“If I get cancelled, then I get cancelled. I don’t do this for the money anymore; I do it because I enjoy it,” Cawthon wrote. “If people think I’m doing more harm than good now, then maybe it’s better that I get cancelled and retire.”

Following his remarks, Cawthon’s fans helped cause the hashtag #istandbyscott to trend on Twitter.

While Cawthon’s supporters are staying by his side, many others say his response does little to change the initial issue.

It remains to be seen whether the controversy will affect the upcoming release this year of Five Nights at Freddy’s: Security Breach, the latest installment in the long-running series.