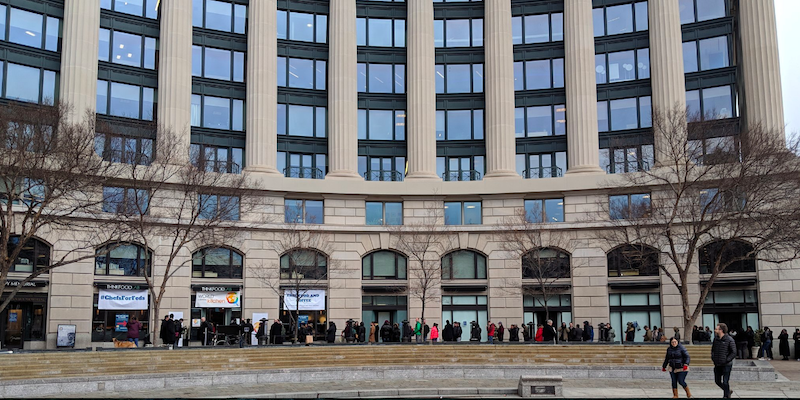 The photo evokes one of the darkest times in American history.

On Friday, Jared Holt, who reports for Right Wing Watch, tweeted a picture from a building in Washington, DC.

“There’s a food line for furloughed federal workers in DC that currently stretches around the side of this building,” he captioned the photo.

“I was taking a break from covering the March for Life rally when I came across this line of furloughed federal workers wrapped around the building. Workers told me they were in line to get free food and coffee, courtesy of local chefs,” Holt told the Daily Dot via Twitter direct message.

The photo shows a sign for chef Jose Andres’ World Central Kitchen, which feeds people in emergency situations, like Hurricane Maria in Puerto Rico and the wildfires in California. Now, they are serving federal workers at the U.S. Navy Memorial.

Responses to Holt’s photo pointed out how much the photo looked like scenes from the Great Depression.

Others pointed out that the image was reminiscent of Soviet-era bread lines, or the food crisis in Venezuela—a common GOP argument against socialist policies.

wait I thought only VENEZUELA had food lines

Looks like the old communist russian bread lines.
What have we become? pic.twitter.com/qMC0yTfmkZ

Other media figures, like Ian Bremmer and Kurt Eichenwald, retweeted the image.

Scene from the capital of one of the wealthiest, most developed countries in the world: https://t.co/l4DAaX17qQ

Or, as the Trump Administration calls it, "on vacation." Or as Coulter calls it, "not a big deal because they will get their money later."

The words of the comfortable who never lived paycheck to paycheck. pic.twitter.com/7v8JiYVL46

A spokesperson from the World Central Kitchen confirmed the nonprofit’s presence at the Navy Memorial.

“The Kitchen is located at 701 Pennsylvania Avenue NW. The kitchen has been open since Wednesday and to date they’ve served over 17,000 meals,” the spokesperson told the Daily Dot via email.

Furloughed federal workers are guaranteed back pay for the time they were prevented from working during the shutdown, but it’s unclear how long the shutdown will last. President Donald Trump is set to make an announcement regarding the shutdown at 3pm on Saturday.