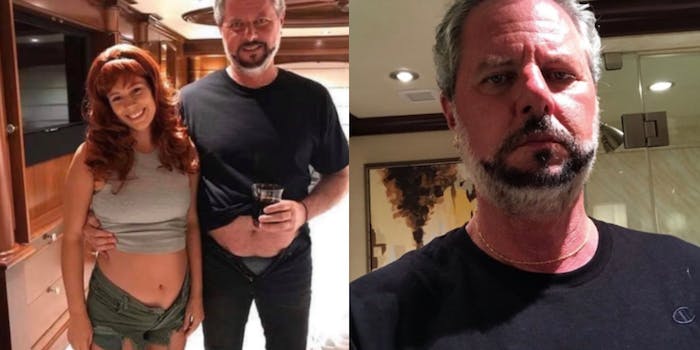 Liberty University’s President Jerry Falwell Jr. is taking an “indefinite leave of absence” after posting a picture of himself with his pants purposely unzipped.

Falwell Jr. was the head of one of the largest evangelical Christian universities in the world. Liberty University leadership asked the president to step away from the position on Friday after his Instagram picture went viral earlier this week.

The photo shows the president’s hand around a woman’s waist. Both people have their pants zipped down and their shirts pulled up in order to expose their underwear and stomachs. Falwell Jr. also has a drink in his hand.

“More vacation shots. Lots of good friends visited us on the yacht,” Falwell Jr. captioned the Instagram picture. “I promise that’s just black water in my glass. It was a prop only.”

The president later deleted the photo. But not before people took screenshots.

The photo prompted widespread backlash—both inside and outside the university. Author and political commentator Meghan McCain was one of many high-profile people to call out the president. People at the school also found it hypocritical that the president posted the picture considering that it’s against the rules for students to drink.

The president apologized and told local radio station WLNI that he’s “gonna try to be a good boy from here on out.” However, the university leadership appeared to have already made up its mind.

This was far from Falwell Jr. first public incident. He’s made several racist statements over the years. Back in June, Black Liberty staffers resigned after he made a joke about blackface and the KKK.