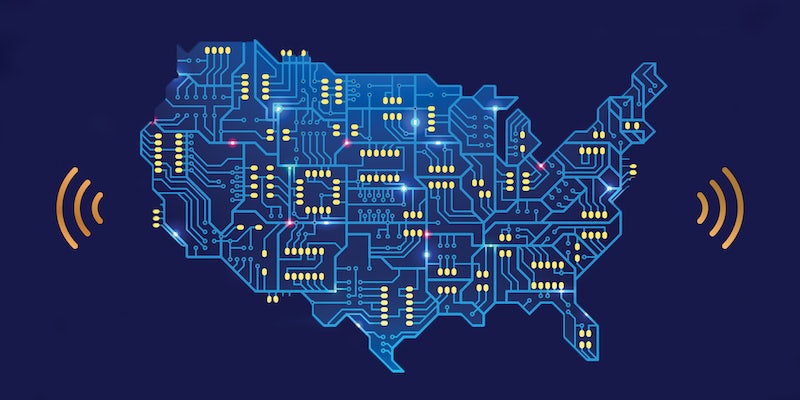 The new maps will only be as accurate as telecom monopolies are honest.

For a nation of 400 million, broadband has become an important utility, tethering Americans to remote work opportunities, education, and health care. Yet despite endless lip service paid to broadband’s incredible importance, the U.S. government has never had a truly accurate understanding of where broadband is actually available.

Now, the country is embarking on an ambitious effort to redo its broadband maps and paint an accurate picture of who in America might have woefully weak WiFi. But by not fixing concerns and problems with the previous ways it collected data, there’s a major concern it could be massive misuse of money.

The U.S. broadband market is dominated by regional monopolies, who see little competitive incentive to uniformly expand access or compete on price. As a result, most Americans have the choice of only one or two ISPs. And this market failure is obscured and compounded by notoriously unreliable U.S. broadband maps that overstate competition and downplay the scope of the problem.

After decades of complaints, the Federal Communications Commission (FCC) is finally doing something about it, having been granted funds to remap America’s broadband.

But industry watchers say the new effort is not doing enough to prevent these telecom monopolies from lying about coverage, or gobbling up billions of dollars for broadband deployment promises they may not follow through on.

The FCC is mandated by The Communications Act to do an annual review of the broadband market to determine if broadband is being deployed on a “reasonable and timely basis” to all Americans. If it isn’t, the FCC is theoretically supposed to do something about it. So the agency for decades has attempted to map broadband.

It just has never done a halfway competent job of it.

For years, the FCC failed to consistently verify broadband availability data provided by telecom giants, allowing them to overstate coverage. For just as long, the agency declared an entire census block “served” with broadband if Internet Service Providers (ISPs) claimed they could offer service to just one home in that block.

The end result is an overly optimistic view of the nation’s broadband problems. Whereas the FCC claims that 14.5 million Americans lack access to broadband, independent research suggests the real total may be anywhere from 36 to 42 million. Studies suggest the FCC also dramatically undercounts the estimated 83 million Americans that live under a broadband monopoly.

You need only plug your address into the FCC’s most recent broadband map, at a cost of $350 million, to see how the government often overstates broadband speeds and competitors on a block by block basis. The FCC has also long been criticized for not collecting and sharing broadband pricing data, which matters as much as coverage, because a key obstacle to broadband adoption is affordability.

The U.S. has thrown untold billions of dollars in tax breaks and subsidies at broadband monopolies in exchange for broadband upgrades that often don’t materialize. As those subsidies have ballooned, state leaders have increasingly criticized the FCC mapping process in the hopes that better maps would mean faster broadband for constituents.

To help tackle the problem, the FCC hired a third-party consultant, Costquest, which insists the new maps will study broadband at a far more granular level, tracking broadband access to nearly every building—114 million in total—in the United States.

Late last month, the FCC provided an update on its mapping improvements, stating the new system had only just started tracking broadband availability data across 2,500 different ISPs, which have until Sept. 1 to submit data to the new system.

“For too long, our broadband maps have been a patchwork with information gaps that impeded the ability of policymakers to assure that critical funding efforts could be precisely targeted to deploying broadband facilities to consumers and communities most in need,” FCC boss Jessica Rosenworcel said of the improvements. “The new Broadband Data Collection will tie together data from multiple sources to give us an accurate, detailed, and evolving picture of broadband availability that is much needed and long overdue.”

But Costquest’s CEO acknowledges data accuracy will depend heavily on the integrity of the data submitted by the telecom industry, which continues to have a vested interest in overstating both speeds and availability to obscure monopoly harm. That worries state leaders who for years have been mapping U.S. broadband gaps themselves in the wake of federal dysfunction.

In a blog post on its own site, Costquest was rather flippant about the possibility its broadband efforts might not properly serve Americans in need of high-speed internet.

There’s still a [Garbage In, Garbage Out] factor,” the company wrote, referring to collecting bad data from ISPs. “And still some garbage in there. There’s also garbage in Hot Pockets, but they’re pretty darn good.”

“There is a big difference often between what a company may advertise as available, versus what they can actually deliver to a location,” Schaffer said. “There is a history of providers overstating their footprints and the quality of service in their footprints for a number of reasons, including the FCC rules and an interest in protecting the ISP’s footprint.”

This gap between what ISP’s claim they offer and reality was particularly pronounced during the COVID crisis, when a boom in Zoom telecommuting and home education forced policy leaders to pay more attention to slow broadband speeds and spotty availability.

“We share these concerns about mapping,” the Electronic Frontier Foundation’s (EFF) Chao Jun Liu told the Daily Dot. “Any mapping that relies on industry self-reporting will be doomed with over-stating of capacity.”

There’s a lot of money resting on the FCC getting its new mapping improvements right. More than $50 billion in new subsidies are only just starting to flow to the states thanks to the Infrastructure Investment and Jobs Act (IIJA) and American Rescue Plan Act.

As part of the IIJA, the Broadband Equity Access and Deployment (BEAD) program is poised to deliver $42 billion in new funding to states. But most of that funding can’t be fully doled out until the FCC both finishes the maps and has a majority of agency commissioners vote to approve them. And many older existing subsidy programs still rely on the old, outdated maps.

When an ISP overstates broadband availability, it’s up to either the FCC, municipalities, or state leaders to challenge the data. But groups like the EFF say the FCC has a mixed track record of challenging large providers.

“It takes communities and states a while to get organized around this, and we have no idea what type of data we should be gathering, and how we can present it to be accepted,” Schafer said.

The Biden FCC refused to comment when asked about the concerns.

While the FCC states that the new maps should be released this fall, that could be complicated by the broadband industry’s ongoing quest to stall the confirmation of Gigi Sohn to the FCC.

“The FCC needs to vote to release the broadband maps once they’re completed,” Jun Liu said. “Right now, we have a 2-2 Commission, and the crucial fifth vote, Gigi Sohn, is still in limbo. If Gigi, or someone else, isn’t confirmed by November we could be looking at a situation where the FCC can’t agree among themselves to release the maps, which in turn holds up federal broadband spending.”

There’s little doubt that the new maps will be a significant improvement to the heavily-flawed U.S. broadband maps long exploited by telecom monopolies. But there remains ample concern that the FCC’s timeline may not be realistic, the end data may not be transparently available, and the entire system may still be gamed by the nation’s dominant broadband giants.

“A lot is riding on these maps and the FCC getting these maps at least going in the right direction,” Jun Liu said. “We’ll see how well they actually do.”