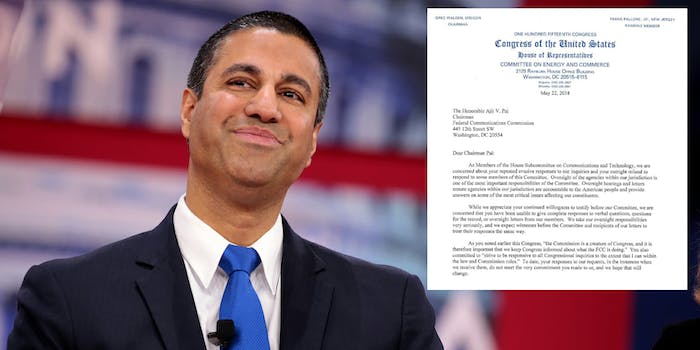 The House committee wants some answers.

Thirteen members of the House Committee on Energy and Commerce called out Federal Communications Commission (FCC) Chairman Ajit Pai for his “evasive responses” and “outright refusal to respond” to their concerns about net neutrality and other topics.

The letter sent Tuesday asks that Pai respond to their questions by June 4.

“While we appreciate your continued willingness to testify before our Committee, we are concerned that you have been unable to give complete responses to verbal questions, questions for the record, or oversight letters from our members,” the letter reads. “We take our oversight responsibilities very seriously, and we expect witnesses before the Committee and recipients of our letters to treat their responses the dame way.”

The demand for answers includes letters they had sent to Pai in the past on topics including:

The House committee isn’t the only branch of Congress looking for answers from the FCC, which did not immediately respond to the Daily Dot’s request for comment.

On Monday, Sen. Jeff Merkley (D-Ore.) and Sen. Pat Toomey (R-Pa.) sent a letter to Pai saying their identities were two of millions used in allegedly fraudulent posts on the FCC website ahead of the agency’s vote to repeal net neutrality rules last year. The letter included a demand for more details on the FCC’s investigation into the fake comments.

Last week, the Senate voted 52 to 47 to pass a Congressional Review Act (CRA) resolution that would be the first step in overturning the FCC’s decision to repeal net neutrality rules.

The CRA will now face a vote in the House, and if successful, would need to be signed by President Donald Trump.

You can read all of the House committee’s letter here.