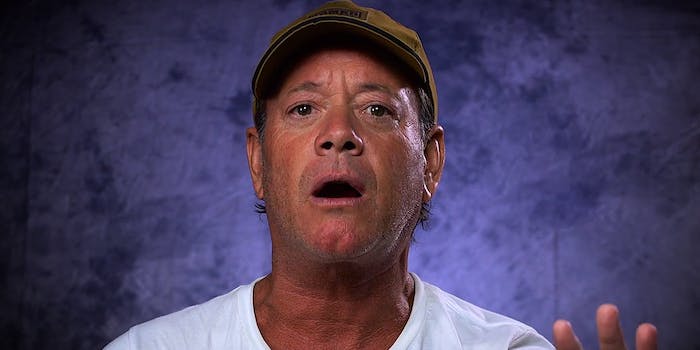 He said he was 'ready to ram a hot poker' into the Parkland survivor's a**.

Sinclair Broadcast Group, which was reportedly making TV anchors run misinformed pro-Trump segments, has found itself in yet another controversy: In a tweet, one of its local TV show hosts suggested he would sexually assault Parkland survivor David Hogg.

For the past three years, conservative TV and radio pundit Jamie Allman hosted The Allman Report on KDNL, a St. Louis TV station operated by Sinclair. But after Allman tweeted he was “ready to ram a hot poker” into “David Hogg’s ass,” activists across the state sparked a boycott against the conservative TV show host. As local advertisers vowed to pull their ads, Allman resigned from the station, and his show was swiftly canceled.

“We have accepted Mr. Allman’s resignation, and his show has been canceled,” PR executive Ronn Torossian told the Washington Post. Allman’s Twitter account has since been set to private.

People, your voices work!@TheGellmanTeam has responded to the cruel attacks on kids by #JamieAllman on @971FMTalk. Pulling their $$$.

The boycott against Allman took off on Twitter, where users tracked down his advertisers and contacted sponsors about his behavior, leading several to distance themselves from the pundit and pull their ads. The protest was partially led by Missouri State Rep. Stacey Newman (D), who told the St. Louis Post-Dispatch that she was “amazed” by the outpouring against him.

“We’ve had people all over Missouri [and] all over the country weighing in on this,” Newman said on Monday, the Post-Dispatch reports. “It’s heartwarming to know that tons of people throughout the state understand this is not acceptable.”

Twitter users were also astonished by Allman’s comments, leading many to compare his behavior to Laura Ingraham’s disparaging comments against Hogg from late last month.

Think Allman still considers himself a “good Catholic” after his vicious, vulgar threat to sodomize a traumatized teenager? #boycottAllman

Jamie Allman made his account private. Guess he doesn’t like it when people take him to task for tweeting about sodomizing kids who survived school schoolings. Real titan of media right there.

What is it with conservative talk show hosts that make them feel threatened by teens who don’t like being shot at school? Is it because they’ve started an actual movement you will never achieve? @IngrahamAngle Thoughts?

@IngrahamAngle – You say you won't be silenced by the left, but you and Allman both lost all sense of appropriate behavior in your vile words to@davidhogg111. Neither you nor Jamie Allman are responsible enough to hold jobs as media commentators. Grow up or be fired next round.

Jamie Allassman should be his name forever more

Despite being pulled from Sinclair, Allman still has a talk show on local radio station KFTK, although a substitute host said he will be “taking a couple of days off,” according to the Post. Newman told the Post-Dispatch that her “efforts will continue” until the conservative pundit loses his role on the air.