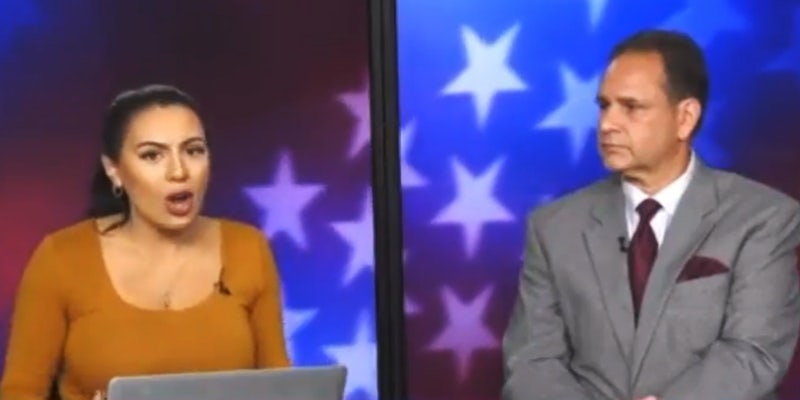 ‘They don’t want him to expose the pedophiles’: Far-right anchor rants that ‘deep state’ raided Trump

A far-right news show host is getting flamed on Twitter for saying the Federal Bureau of Investigation (FBI) raided former President Donald Trump’s Mar-a-Lago resort to prevent him from exposing a deep state pedophile ring.

Conservatives and the far-right continue to grasp at straws to explain the FBI searching Trump’s residence at Mar-a-Lago. The search was reportedly related to a lengthy investigation into whether Trump illegally kept documents from his presidency, which he has denied.

“This past raid of Mar-a-Lago, it’s a threat. They don’t want him to expose the pedophiles that he knows about,” she said on The Water Cooler with David Brody.

QAnon conspiracy theorists are obsessed with elite, Satanic pedophiles they believe control the world. They’re convinced Trump was or is at war with them.

Perez implied that Trump is a QAnon follower.

“He was basically supporting QAnon by saying, ‘Hey, I hear they’re against pedophiles. So am I,'” she said.

“…This is all part of the puzzle I’m trying to put together here.”

The video of Perez’s comments posted by far-right watchdog Patriot Takes has been viewed 270,000 times and retweeted nearly 900 times.

People were stunned and amused by Perez’s take.

“Weird how Trump has waited this long to expose these apparent pedo networks. I’m sure we’ll get more information when they release the Kraken,” wrote one, referencing Trump’s former attorney Sidney Powell.

“Love David Brody just going ‘right…right…that’s right’ as his co-anchor rants like a lunatic about how the moon is swiss cheese and Trump is preventing the deep state from eating it,” wrote former Republican political operative Tim Miller.