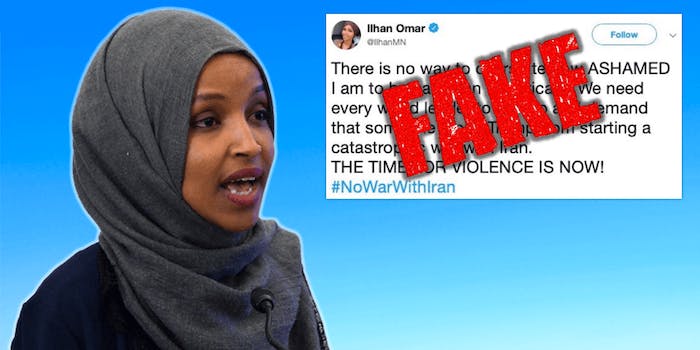 A fake tweet alleging to show Rep. Ilhan Omar (D-Minn.) calling for violence in the wake of growing tensions between the U.S. and Iran is being circulated online.

“There is no way to overstate how ASHAMED I am to be called an ‘American,'” the fake tweet begins. “We need every world leader to ruse up and demand that someone stops Trump from starting a catastrophic war with Iran.”

The fictitious message ends with an all-caps plea asserting that “THE TIME FOR VIOLENCE IS NOW!”

The fabricated image, according to FactCheck.org, appears to have been based on a real tweet Omar sent out last Friday.

“There is no way to overstate how dangerous this is,” the real tweet says. “We need every voice to rise up and demand that Congress stop Trump from starting a catastrophic war with Iran.”

There is no way to overstate how dangerous this is.

We need every voice to rise up and demand that Congress stop Trump from starting a catastrophic war with Iran.

Reports indicate that Darrell Scott, the CEO of Trump campaign group National Diversity Coalition For Trump, also repeated the false claim that Omar was “ashamed” to be an American on his Facebook page.

“She’s the biggest mistake our immigration authorities ever made,” the elder Wohl stated.

While some instances of the false tweet have been removed, the image is still easily found on several major social networks.

The incident follows the death of top Iranian general Qassem Soleimani, who was killed in a U.S. airstrike last week. Iran has since retaliated by launching several missiles at U.S. military sites in Iraq.