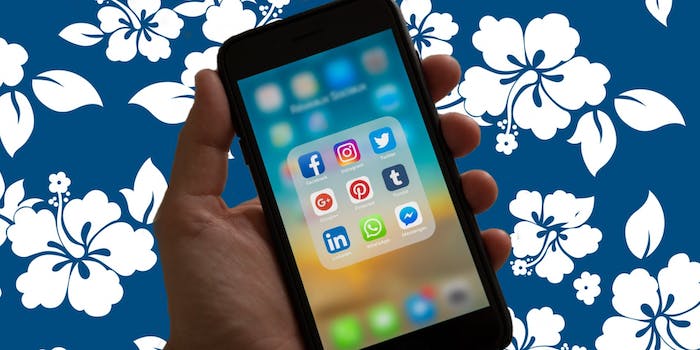 Facebook carries out major crackdown on the ‘boogaloo’ movement

Hundreds of accounts, groups, and pages that praised violence have been removed.

Facebook took coordinated action against followers of the “boogaloo” on Tuesday by removing hundreds of accounts and groups.

The far-right movement, whose members are often known to wear Hawaiian shirts, advocates for advancing what it believes is an inevitable second Civil War.

The social media site announced that it now deems followers who advocate for violence as members of a “dangerous organization.”

“As we do following other designations, we will now work to identify where to strengthen how we enforce our policy against this banned network and identify attempts by the violent U.S. anti-government network to return to our platform,” the company said.

In total, 220 accounts, 106 groups, and 28 pages were pulled from Facebook. Over on Instagram, 95 accounts were removed as well.

An additional 400 Facebook accounts and more than 100 groups that were not directly tied to the boogaloo were also banned for showing support for the group.

Prior to Tuesday’s action, Facebook says it had taken down over 800 posts related to the movement for violating its policies on inciting violence.

Facebook’s effort came after several followers of the movement were charged in federal court for numerous offenses, including the killing of a security officer at a California courthouse and for plotting to attack a police brutality protest in Nevada with explosives.

The company added that non-violent boogaloo content will still be allowed to remain on the platform.