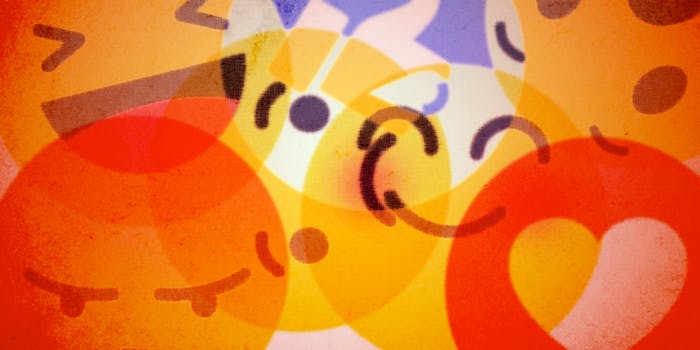 A hard look at how Facebook users react to Trump, Clinton, and Sanders

The results may surprise you.

It’s no surprise that this election season is wilder than previous cycles.

In a change from preceding years, both the presumptive Democratic and Republican candidates for 2016 have had—and continue to have—pretty low rankings. Hillary Clinton once had a net negative rating among American voters of 11 points, and only 26 percent said they had a positive view of Donald Trump.

But since Facebook launched their new emojis—which offers the reactions “Love,” “Haha,” “Sad,” “Angry,” and “Like”—there’s now another data-driven way to tell how each candidate is faring.

TrackMaven, a marketing analytics firm, measured the reactions to the last 100 Facebook posts for five presidential candidates from both parties and the results may have you clicking “wow.” 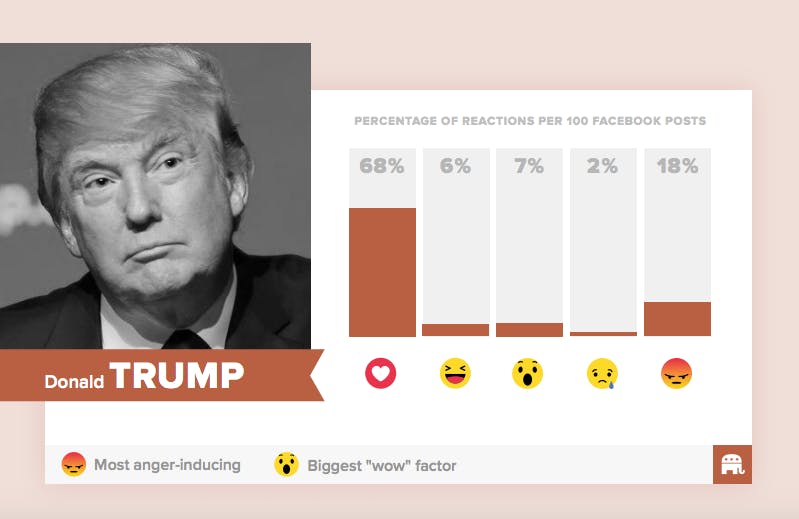 Whether you love him or hate him, everyone has an opinion on Trump—and it shows in his numbers.

Across his past 100 posts, Trump racked up 6.8 million reactions, which is more than any other candidate and over double the number of interactions spurred by Democratic challenger Bernie Sanders.

Out of the last five Democratic and Republican presidential candidates who remained in the running for president, Trump proved to be the most anger-inducing, and had the biggest “wow” factor.

The TrackMaven team says this should come as “no surprise,” as Trump’s harsh rhetoric around Muslims, immigrants, and other minority groups has isolated him from many, including some in his own party. Trump and Sen. Ted Cruz (R-Texas) are the only two candidates for whom anger accounts for a double-digit percentage of their Facebook reactions. 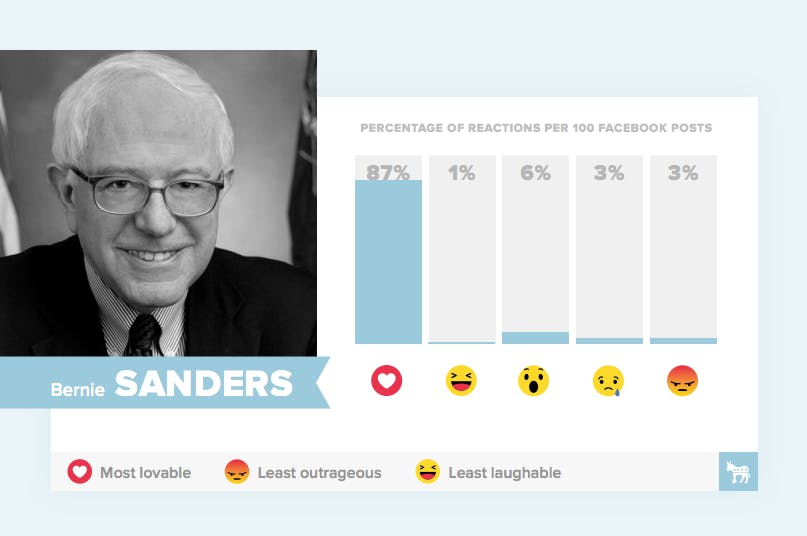 The most lovable candidate out of all those running for president was Sen. Sanders (I-Vt.). In a dramatic change from Trump, Sanders proved to be the least outrageous candidate but also the least laughable.

Sanders also came behind Trump as the second most engaging candidate, with 3.3 million total reactions (including 2.9 million likes) across his past 100 posts.

The poll shows that “love” was the dominant reaction in the party race, accounting for 75 percent of the total Facebook emojis used for the candidates.

For Sanders, however, his “love” ratings were through the roof.

In his love-to-anger ratio, Sanders led with 28 times more “love” than “angry” reactions. Ohio Gov. John Kasich (R) and Clinton tied in second place with 11 times more hearts than scowls, while Trump trailed in last place with a ratio of 4-to-1. 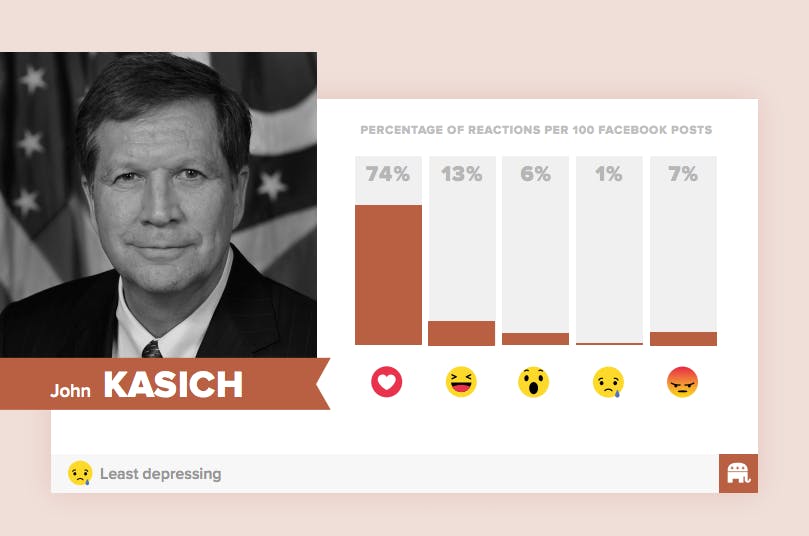 Although he dropped out of the race early after a disappointing finish in the Indiana primary, Kasich was a well-liked candidate, even if he didn’t fare well in the Republican primary. 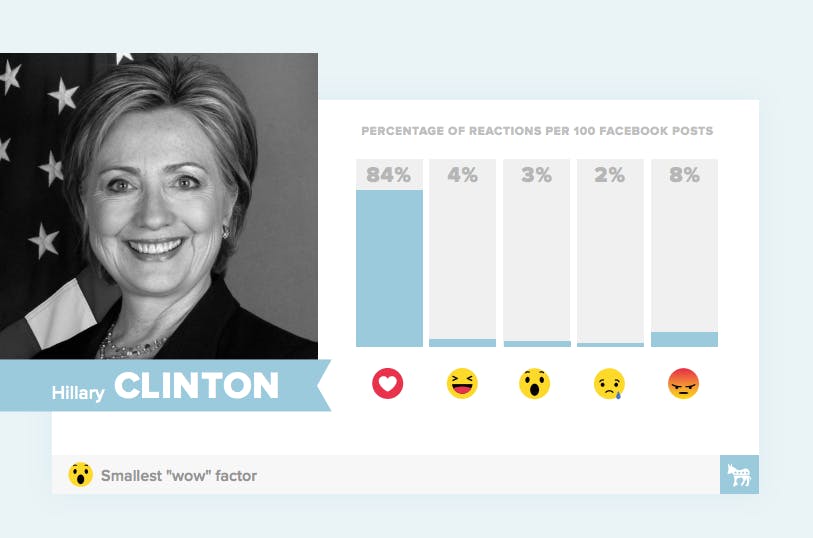 It seems as though Clinton’s depressing rankings don’t transfer over to Facebook.

The presumptive Democratic nominee ranked second—right behind Sanders—for most lovable and had the fewest “wow” rankings out of the top five candidates. Clinton trailed behind both Trump and Sanders in Facebook engagement, with only 1.7 million reactions.

Clinton also elicited a good laugh from 4 percent of her audience—putting her higher than Sanders on that one—and she evoked the least tears from those who read her posts. 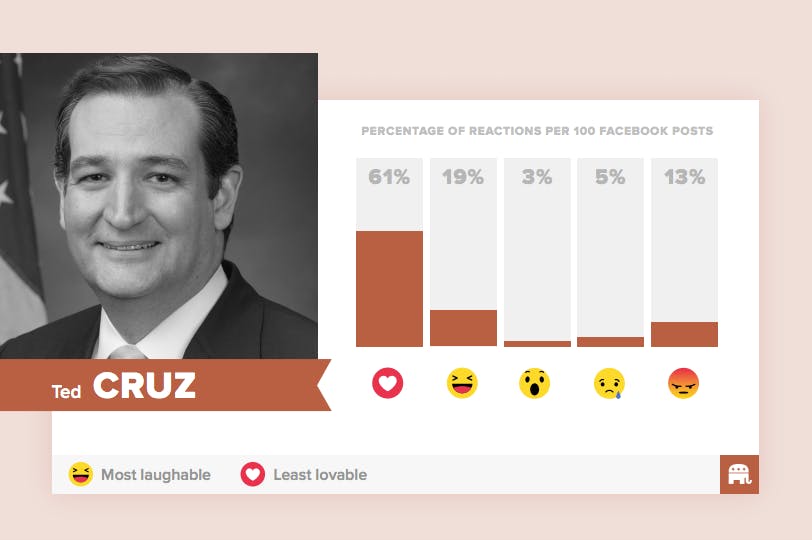 Last, but certainly not least, is Cruz—otherwise known as the senator who had the most mixed reviews from his Facebook posts.

Cruz was the least lovable out of all five candidates, ranking below Trump by seven points. Those who seemed to dislike Cruz’s posts may also be the same users who cried at his content. The poll shows that Cruz evoked the most sad reactions, with Sanders behind him at 3 percent.

Surprisingly, Cruz also sparked the most “haha” reactions, but as TrackMaven says, it’s unclear whether users were laughing with the senator or at him.