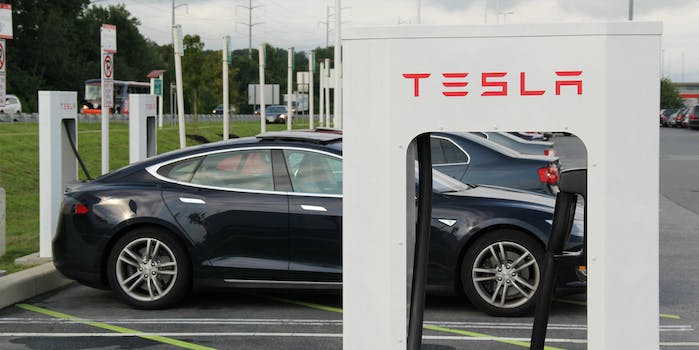 They hold 90 percent of their charge after 11 years.

It’s no mystery that lithium-ion batteries decay over time, losing energy and heat with each recharge. It’s the reason your 2-year-old smartphone dies at 8pm when it once easily got you through a full day of use. For smartphones, it’s an easy fix: Buy a new one or take your device to a repair shop for a replacement battery. But for more expensive products, like electric cars, the inefficiencies of lithium-ion cells presents a real concern.

If electric car batteries lose a significant portion of their charge, replacing them could become cost prohibitive. Add to that the annoyance of having to constantly recharge a car battery after a few years of ownership, and it’s easy to see why battery degradation is one of the most troubling wildcards dictating the future of electric vehicles.

Via Electrek, a group of Dutch-Belgium Tesla owners compiled data in a public Google Doc on the remaining charge for 350 EVs to see how well their batteries held up. The results are impressive, if not unprecedented.

Tesla batteries will likely retain more than 90 percent of their charge after 160,000 miles. The first 5 percent loss comes early, after only 50,000 miles of driving, but the remaining 5 percent would take an additional 110,000 miles or so.

According to the Federal Highway Administration, Americans drive on average an estimated 13,476 miles per year. Divide that by 160,000 miles, and a Tesla battery should hold 90 percent of its original charge after nearly 12 years. According to Statista, the average length of ownership for new cars is roughly 6.5 years. That’s all to say Tesla owners won’t likely need to worry about replacing their car battery.

The result is in line with Elon Musk’s claim that a simulation of Telsa batteries showed capacity remaining above 80 percent after 500,000 miles of driving. Like with any gadget, there are several factors that determine how long the battery lasts, not limited to charging habits, weather conditions, and frequency of use. It appears charging daily at 30 to 40 percent remaining but never beyond 90 percent maximizes the lifespan of a Tesla battery.

This is a particularly encouraging result for prospective Model S and Model X owners since battery decay is not covered by the company’s limited warranty.

With the Model 3, however, Tesla is introducing a guarantee that the battery will retain 70 percent of its charge over a course of eight years.

Unless researchers can crack the impossible feat of making a battery 100 percent efficient, devices that rely on lithium-ion cells will eventually wear down. For Tesla owners, at least, that shouldn’t be a huge concern.