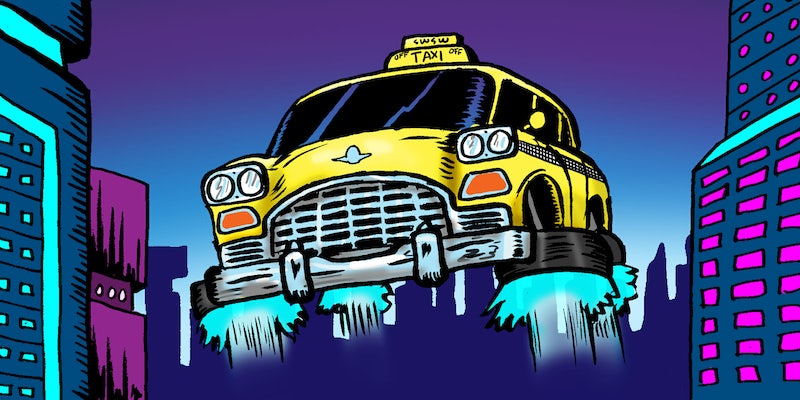 Flying taxis are coming—will we be ready?

The industry is dying to earn your trust.

Flying taxis are coming, and they’ll be safe.

That assurance was routinely uttered during each SXSW panel on electric urban air transport this month. Along with raising the ears of investors who aren’t yet ready to take the plunge, it was an attempt to comfort those in attendance.

Among the endless barriers flying taxis face between sci-fi and reality, earning your trust will be the most difficult task. It’s a similar problem self-driving car makers face, made more complicated by incidents that occur during testing.

“Put your hand up if you’d ride in a flying taxi today,” executives at multiple panels asked the crowd. Dozens of Apple Watches and Fitbits predictably shot into the air as the “tech savvy” attendees at the convention volunteered. A smile spread across the exec’s faces in surprise and delight at the participation. But crowds outside these small Austin, Texas, venues won’t be so easy to please.

Derrick Xiong, co-founder of Chinese passenger drone company EHang, said winning over the public is the biggest hill to climb for flying taxis. He maintained the technology isn’t an issue and that EHang has already conducted hundreds of successful flights in its 184 aircraft.

“The biggest challenge is mentality because people do not feel secure about this new form of aircraft,” Xiong said. “It’s electricity powered, there are eight propellers, it looks strange—’I don’t know if it’s safe.'”

He continued, “People are getting used to—today there was a helicopter crash. You know, two people died. You don’t feel that much surprise. But let’s say someone gets injured in this kind of aircraft, that would be big news. People are afraid of new things.”

You can imagine what it was like to be the first person to drive an automobile or motorcycle. But the risk of stepping into a flying taxi will be more like demoing early airplane models: You’re putting your life on the line flying 300 feet in the air in a bobsled with propellers.

Michael Thacker, the executive vice president of technology at Dallas-based aerospace company Bell, said “public acceptance” will be a challenge. He emphasized the importance of demonstrating how a flying taxi can impact people’s lives in order for them to see its worth.

A 2017 survey conducted by the University of Michigan’s Transportation Research Institute illustrates how difficult that task will be. It found three-fifths of 508 respondents were very concerned about the overall safety of flying cars and more than 80 percent think it’s important for them to have a parachute.

Surveys on self-driving cars, another upcoming mode of autonomous transport, had similar findings. A 2017 survey by AAA found three-quarters of participants admitted to being afraid of riding in a self-driving car, and only 10 percent said they’d feel safer having them on the road. A Pew Research Center survey showed less than half of Americans would want to ride in an autonomous vehicle.

But even before millions of dollars are shoveled into marketing campaigns designed to ease the mind of prospective customers, the dozens of manufacturers building VTOLs will need to work closely with governments around the world.

In the U.S., these startups were recently thrown a lifeline after the Federal Aviation Administration removed a major roadblock. It recently rewrote section 23 of the Code of Federal Regulations, making it easier for small aircraft to gain flight certification.

The purpose was to “remove current prescriptive design requirements” in favor of “performance-based” standards. This opens doors for flying cars since it allows for a wider range of designs.

Uber Elevate, the ride-hailing giant’s flying taxi division, is one of the major players working with officials to pass new safety regulations. Nikhil Goel, head of product at the Uber branch, said he was “surprised to see the FAA take an aggressive approach” on flying cars, a move that could help Uber hit its target of testing a Blade Runner-like mode of transportation by 2020.

But there are far too many questions on the capabilities of flying car technology for government bodies to go beyond creating broad legal frameworks. For example, it’s still not clear whether early flying cars will be controlled remotely, autonomously, or with a pilot, what infrastructure will be needed to support them, and how they can be integrated into public airspace.

Another concern is pilot requirements. If autonomous technology isn’t ready for primetime, there will suddenly be a large demand for pilots. But airlines are facing a crippling pilot shortage.

“With the number of aircraft we’re talking about, we’ll need more pilots than ever before,” Goel said. “With that, there’s a huge challenge in recruiting enough pilots to do this job. Flying will be largely computer controlled so we don’t need super good pilots but we’ll need to develop new pilot standards given the level of effort required.”

Then, of course, there are the technological hurdles that need to be solved. In their current prototype stages, VTOLs aren’t ready for the skies. That’s not to say working models don’t already exist. Depending on your definition, there are many operating flying taxis roaming the skies, but we’re still a long way from parking personal helicopters on rooftops or hailing them from an app.

Apart from safety, noise pollution is an issue that could put flying taxi projects on hold. In its 98-page whitepaper on the challenges it faces building flying taxis, Uber says vehicle noise will need to blend into the existing background wherever they fly. It determined humans are more vulnerable to higher-pitched noises produced by the shorter rotors that are required of these small-scale aerial vehicles.

“We could definitely make a flying car — but that’s not the hard part,” Tesla CEO Elon Musk told a London audience back in 2014. “The hard part is: How do you make a flying car that’s super safe and quiet? Because if it’s a howler, you’re going to make people very unhappy.”

Brien Seeley, founder of the Sustainable Aviation Foundation, told Fast Company last year that he believes flying taxis will need to produce below 50 decibels, the volume of a conversation at home, from 40 meters away. He says meeting this goal will be a “Herculean challenge.”

And since VTOLs (or eVTOLs) are electric, building efficient batteries will be paramount. That’s why, as Goel explained, Uber recently poached Tesla’s lead battery expert to run its Elevate team.

“You’ve got eight propellers, so you have a redundancy. One propeller fails, you’ve still got seven to back it up. But what are you sacrificing? You’re sacrificing energy efficiency,” Xiong said. “This is already a U-shaped flight path, and it can only fly today for about 25 to 30 minutes and 30 miles per charge.”

If these challenges can be overcome, flying cars present an opportunity to displace people from our congested roadways: Uber says a trip between San Francisco and San Jose, which can take up to 2.5 hours in traffic, would be a 15-minute flight. Until then, these air transport vehicles will remain in the realm of science fiction.