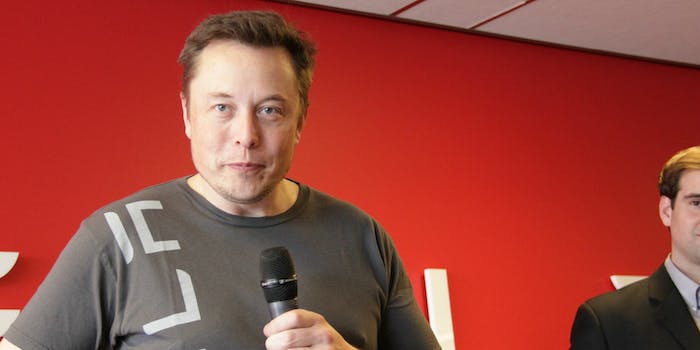 He wants 'equal and fair rules for cars.'

Replying to Trump’s tweet on how the country plans to reduce its “One Billion Dollar” trade deficit, Musk laid out his frustrations with selling electric cars in China.

Do you think the US & China should have equal & fair rules for cars? Meaning, same import duties, ownership constraints & other factors.

While the U.S. only asks a 2.5 percent import duty for cars coming from China to the U.S., China asks that U.S. automakers pay 25 percent. Musk added that no American auto company can own a factory in China and must instead rely on Chinese-run factories to produce vehicles. On the other hand, five Chinese electric car companies operate in the U.S., Musk claims, alluding to brands like Faraday Future and Byton.

For example, an American car going to China pays 25% import duty, but a Chinese car coming to the US only pays 2.5%, a tenfold difference

Frustrated by this imbalance, Musk asked Trump for “equal & fair rules for cars.”

I am against import duties in general, but the current rules make things very difficult. It’s like competing in an Olympic race wearing lead shoes.

Tesla’s plans to build a factory in China have reportedly stalled over the past few months because Tesla and Shanghai’s government can’t come to an agreement on the ownership structure of a proposed factory. Unlike other car makers that have reluctantly given in to China’s demands, Tesla wants to own a factory outright.

We raised this with the prior administration and nothing happened. Just want a fair outcome, ideally where tariffs/rules are equally moderate. Nothing more. Hope this does not seem unreasonable.

To further entice the president to take action, Musk finished his tweetstorm by explaining how “nothing happened” when he brought up these issues with the past administration.

“Just want a fair outcome, ideally where tariffs/rules are equally moderate. Nothing more. Hope this does not seem unreasonable,” he wrote.

President Trump mentions Elon Musk and other private rocket company founders: "They love rockets, and they're rich. So they're going to be a little less rich probably." pic.twitter.com/xCpbSj7oVn

Interestingly, the tweets were sent right around the time Trump was praising Musk for having successfully landed two of three Falcon Heavy rockets last month. A video released by CNBC shows Trump talking about private companies interested in space travel, including Musk’s SpaceX.

“I don’t know if you saw last with Elon, with the rocket boosters where they’re coming back down,” Trump said. “To me, that was more amazing than watching the rocket go up because I’ve never seen that before; nobody’s seen that before, where they’re saving the boosters and they came back without wings, without anything. They landed so beautifully.”

This isn’t the first time these two have interacted. Musk was brought on to Trump’s advisory council but quit after the president withdrew the U.S. from the Paris climate agreement.