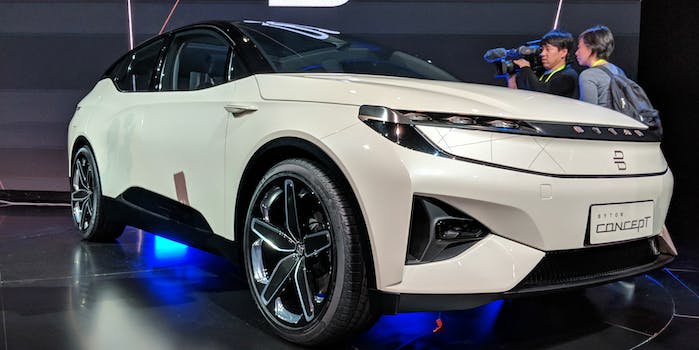 Could this be the SUV of the future?

As traditional automakers adapt their vehicles for an electric, self-driving future, a wave of startups is hoping to cut in line. Last year,  Faraday Future wowed the crowds with its gorgeous FF91, a car that’s no closer to release today than it was back then. This year, it’s Byton, a Chinese-based company, that unveiled its first vehicle on Sunday at CES.

On the outside, the Byton Concept could be mistaken for an ordinary gas-guzzler. The front looks a bit like an Acura NSX while the back has hints of Porche Panamera—a combo that’s more appealing in theory than in practice. Then there’s what Byton calls “commenting lights”—those strange wires cutting across the front grille and rear—which are supposed to interact with the driver, but we’re not convinced they’re worth the aesthetic hit.

The whole package is undoubtedly sleek but not as futuristic as Byton were going for. It’s on the inside where the car really stands out.

In fact, the Byton is essentially a frame for every 2018 tech trend you could possibly think of. 5G wireless? It’ll be compatible when the next-gen network launches, with estimated speeds of 100 gigabits per second. Voice recognition? Check. Like every other gadget at CES, Amazon Alexa comes built-in. It even has facial recognition for controlling its user interface.

The car’s most impressive feature is a gigantic 49-inch display that spreads across the entire dashboard, from one door to the next. It may seem Byton is showing off by placing a display larger than most people’s home TVs inside their car, but this is much more than that. As autonomous technology becomes more sophisticated, vehicles will shift from simple modes of transportation to entertainment hubs. So why not try to make them as comfortable as your living room?

Of course, it will also offer level 3 autonomy, or “conditional automation,” at launch, which means the car will manage most situations but a driver is still needed. Level 4 is expected to arrive in 2020, but there’s no word yet on the holy grail of self-driving: full autonomy, or Level 5.

Other tech in the Byton Concept that you won’t find in your current car includes cameras that replace rear-view mirrors. In fact, it doesn’t have a single mirror. It also has sensors that monitor a passenger’s health. This allows it to adjust when it senses a change in the driver’s vitals. If, for example, your blood oxygen levels decline, the car may reroute you to the hospital.

Despite all this tech, the Byton SUV is rather ordinary as an electric vehicle. It gets an estimated 250-mile range and is compatible with fast charging: 20 minutes for 120 miles. That’s good, not great. It has 272 horsepower. Again, a respectable result. The one spec we love looking at with electric vehicles—the 0 to 60 time—hasn’t been announced just yet.

The company expects to sell its maiden vehicle for “around $45,000.” All things considered, that seems reasonable, or perhaps too good to be true. A surprisingly affordable fully electric car packed with tech is exactly what the industry needs, but we have our reservations. For one, other very similar startups, including Faraday Future and Lucid, have hit some roadblocks as they try to compete with the industry giants. Even Tesla is struggling to produce enough vehicles. Also, Byton isn’t shy about calling its SUV a “concept,” which doesn’t instill confidence in it ever being released.

If you’re already sold by the gorgeous interior and massive 49-inch display, you can try your luck and register to purchase the SUV on Byton’s website or app. It’s expected to ship in China in late 2019 and in the U.S. and Europe in 2020.