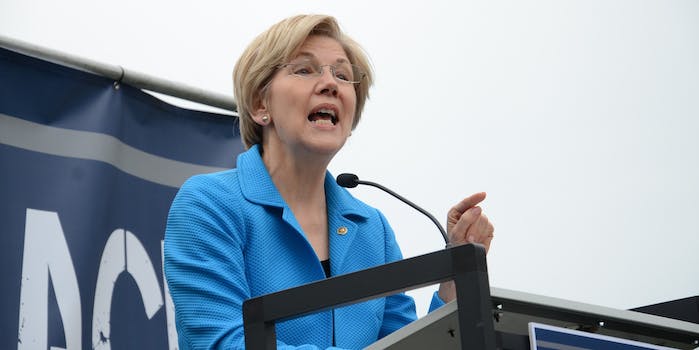 Does this mean Clinton will choose Warren as her VP?

The two women hit the campaign trail together for the first time at an event in Cincinnati, Ohio, on Monday, where Clinton called Warren someone who “tells it like it is.”

According to a press release on Clinton’s website, the event was for Clinton and Warren to “discuss their shared commitment to building an America that is stronger together and an economy that works for everyone, not just those at the top.” As the New York Times points out, the event may simply be a chance to test the chemistry between the two women.

In addition to being a potential running mate for Clinton, Warren has achieved much notoriety for going after both Wall Street banks and presumptive Republican nominee Donald Trump.

“When Donald Trump says he’ll make America great, he means he’ll make it even greater for rich guys just like Donald Trump,” Warren said at the event, according to the Wall Street Journal.

Warren continued, echoing Clinton’s “I’m with her” campaign slogan: Hillary Clinton is “someone who gets up every single day and fights for us. … I’m here today because I’m with her.”

According to a CNN/ORC poll, 34 percent of registered Democratic voters say Clinton should pick Warren as her running mate, and 54 percent believe she should choose someone else.

As of publication, the Clinton campaign did not respond to our request for comment.

Following her critique on Trump during the campaign event, the presumptive Republican nominee released a statement on his website bashing Warren as a “sellout.”

“As Clinton tries to salvage support among the Bernie Sanders wing of the Democrat Party, Senator Elizabeth Warren (D-MA) has become a turncoat for the causes she supposedly supports,” Trump writes.

“Warren’s campaigning for Clinton stands in stark contrast to the liberal ideals she once practiced,” Trump continues. “This sad attempt at pandering to the Sanders wing is another example of a typical political calculation by D.C. insiders.”

Trump notes that Warren has routinely criticized Wall Street for having too much influence in politics. However, according to the Center for Responsive Politics, Clinton has accepted over $41 million from financial industry players.