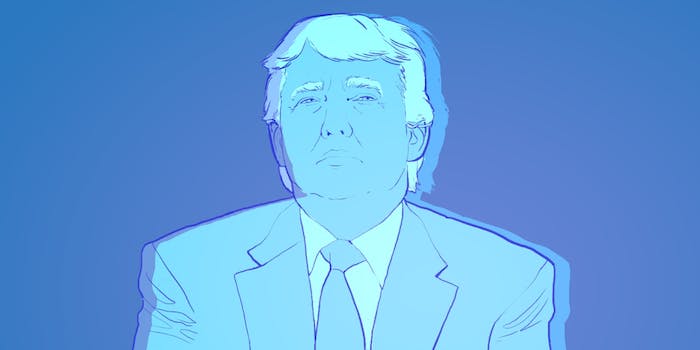 Oh, Donald Trump. He of the big hair and even bigger ego, who seems to think that being elected president of the United States is such a rich man’s birthright that he doesn’t have to become familiar with little details like the U.S. legal system, foreign policy, or major political leaders who literally got elected today.

Perhaps no one was surprised this morning when Trump once again showed his ignorance of facts that anyone with a New York Times subscription could grasp. But regardless, we are all entertained.

"@HamishP95: @realDonaldTrump My Dad is thinking of voting for the first time ever for you. http://t.co/1u9qi8qUPc" Great.

It was a simple tweet: @HamishP95 sent Trump a photo of newly elected U.K. Labour Party leader Jeremy Corbyn, a leftist who ran on a vaguely socialist anti-poverty, pro-immigration platform. In the tweet, the self-described Labour Party member from South England joked that Corbyn was his “dad.”

Trump apparently thinks it’s great that this random guy’s dad is planning to vote for him—utterly clueless that the photo is of a leftist opposition leader who is splashed all over newspapers and websites.

@HamishP95 got some flak from Trump supporters in response, and those tweets—plus their responses—are also hilarious.

The best thing about today’s Trump-shaming Twitter fest is that this is hardly the first time Trump has embarrassed himself on the social network. In September 2014, a prankster sent Trump of photo of what was supposedly his or her parents, asking that Trump retweet the photo in their memory. He obliged.

The photo was actually of notorious serial killer couple Fred and Rose West, who were convicted of the murder and rape of at least 11 young children, some of whom were their own.

Fans of Saturday’s ridiculous Twitter exchange jumped in to try to get the Donald to retweet photos of their own “dads” (clowns, Nazis, Bill Clinton), with little success.

@realDonaldTrump @HamishP95 My dad is thinking of voting for the first time ever for Donald Trump, too. pic.twitter.com/XZEqfJ0uE4

@realDonaldTrump @HamishP95 My Grand Dad (legal immigrant) is thinking of voting for the first time ever for #Trump. pic.twitter.com/sxn5TxJMK8

.@realDonaldTrump My Dad is thinking of voting for the first time ever for you. pic.twitter.com/zKrzRetGEg

True to character, Trump himself refuses to admit that he’s been publicly punked countless times. In a 2012 tweet, the Donald insisted that he could spot a prank from a mile away—referencing the one time that comedian Sacha Baron Cohen tried to have him on a British TV show.

I never fall for scams. I am the only person who immediately walked out of my ‘Ali G’ interview

In truth, it took Trump about 60 seconds to walk out of the interview—leaving Cohen with just enough material to create a segment that brilliantly mocked Shark Tank-like venture capital pitches.

Trump may not be a popular candidate among U.S. voters who care about whether their leaders can keep up with the most basic political news stories, or whether they can tell when they are the butt of national jokes, but he’s doing great with the white supremacist vote!