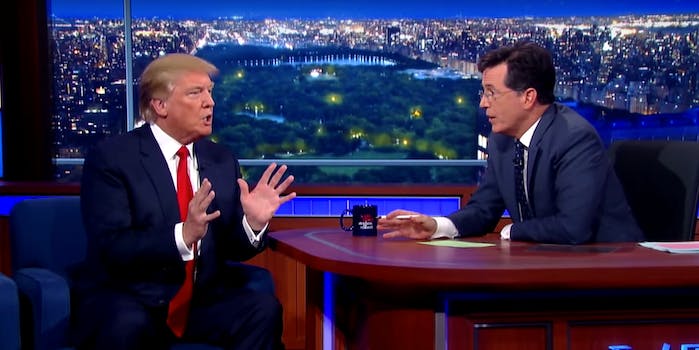 Their full interview was just as great as we imagined.

Stephen Colbert has been making a mockery of Donald Trump on The Late Show ever since he stuffed his face with Oreos in a metaphor about his coverage, but when the two met on stage Wednesday night, it was a lot more subdued than anything we were used to seeing from either of them.

“I’m not going to say this stuff writes itself, but you certainly do deliver it on time every day,” Colbert told Trump about his comments that made for late-night fodder.

They then launched into discussion about the economy and how Trump is funding his own campaign, Trump’s infamous “Make America Great Again” hat, and how—according to Colbert—becoming president would be a downgrade for Trump.

While Colbert went hard on Sen. Ted Cruz (R-Texas) and showcased Ronald Reagan’s more liberal immigration policies one night earlier, he took a different route with Trump. He turned sincere for a minute and apologized for how his character on The Colbert Report had treated Trump over the years. It was a perfect opportunity for Trump to apologize, but naturally he didn’t take it.

They ended up roleplaying to let Trump demonstrate how he was going to make the president of Mexico pay for his proposed border wall—while Colbert offered advice to make the concept even more absurd—and they touched on the one question Trump won’t answer anymore about President Barack Obama.

Of course, he addressed it later on Twitter, blaming the birther movement on Hillary Clinton.

Just remember, the birther movement was started by Hillary Clinton in 2008. She was all in!

Because they’ve both said plenty of ridiculous things over the years, Colbert made Trump guess whether it was him or Colbert’s character who said a certain sentence. Like many Trump quizzes, it’s a lot harder than it looks.