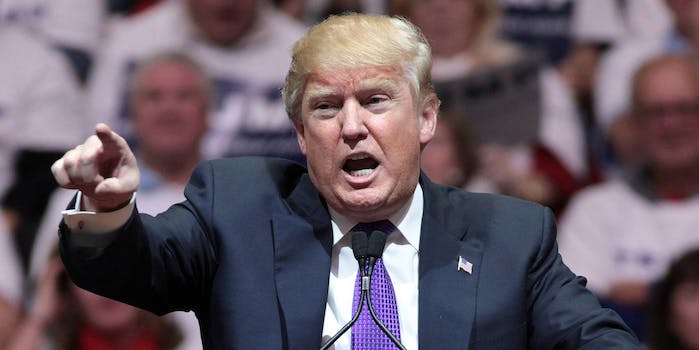 Trump has swept the day.

Rhode Island voters came out overwhelmingly in favor of Donald Trump in its primary on Tuesday.

In a sweeping victory, Trump had 62 percent of the vote, while Ohio Gov. John Kasich had 25 percent and Texas Sen. Ted Cruz nabbed 11 percent, with 6 percent of precincts reporting.

Though the smallest U.S. state has a just 19 Republican delegates up for grabs, Trump is after every delegate he can get on the path to 1,237—the number needed for nomination. Unlike many states with winner-takes-all delegate distributions, Rhode Island’s delegates are divided up amongst competitors based on the proportion of the vote they achieve.

Due to the tightness of the race, Rhode Islanders were momentarily and unfamiliarly a campaign focus. In the lead up to the vote, former Secretary of State Hillary Clinton, as well as Kasich visited the state Saturday, Vermont Sen. Bernie Sanders held a rally there on Sunday, and Trump held an event on Monday.

Trump took some time during his Warwick rally to attack Kasich’s “disgusting” eating habits. “I have never seen a human being eat in such disgusting fashion,” Trump said. Some on Twitter appear to see his point:

Kasich is going wild, eats two helpings of spaghetti and part of a huge sandwich

Damn: after downing two plates of spaghetti and half a sandwich, Kasich orders pasta fagioli pic.twitter.com/8oXAxH3q3G

Despite what an attack may suggest, Trump was expected to win Rhode Island heading into Tuesday: Real Clear Politics gave him a nearly 30-point lead over his contenders.

“Trump voters have a grievance—that their country has been taken away from them, and they are angry and frustrated about it,” said Matthew McDermott, Senior Analyst at the polling firm Whitman Insight Strategies. “The Republican primary electorate in Rhode Island is ripe with these voters: unaffiliated, blue collar white men that, frankly, feel screwed by their socioeconomic status in America today.”

With Trump’s popularity among independents, he was likely aided by Rhode Island’s open primary, which allows unaffiliated voters to decide at the precinct which primary they’d like to vote in.

With four other states besides Rhode Island voting on Tuesday—Connecticut, Pennsylvania, Maryland and Delaware—the day has been dubbed “Super Tuesday IV” and the “Amtrak Primary” thanks to the railroad company’s pathways through the northeastern states.

The contenders will face off again on May 3 in Indiana.