Donald Trump participated in a Reddit AMA, but not much of anything was revealed

Are we really surprised?

Donald Trump hosted a Reddit AMA on Wednesday evening that revealed little and surprised no one.

Trump answered a grand total of 13 of the hundreds of questions that users submitted to the site. The Republican nominee for president avoided addressing the recent DNC hacks or his call out to Russia to release rival Hillary Clinton’s emails earlier in the day. Questions on WikiLeaks, cybersecurity, or net neutrality were also dodged.

Instead, Trump answered softball questions that included, “Are you getting tired of winning?” and “Which U.S. president do you admire the most?” Many of Trump’s responses, typed while mid-air on a flight to a rally in Toledo, Ohio, were one or two lines. Trump was late to the AMA and then out-of-contact for several minutes after answering the first question, both times blaming the spotty Wi-Fi service on his private plane.

The AMA was put together by moderators at the notorious r/the_donald, a subreddit devoted to Trump supporters that some accuse of fostering hatred and intolerance. Posts crop up on r/the_donald that regularly include racist, sexist, homophobic, anti-Semitic and/or Islamaphobic memes or images. While the subreddit’s official rules ban such behavior, enforcement is light and left up to the moderators.

The same moderators hand-picked the questions that Trump ended up answering. While users were able to upvote the best questions, the moderators got the ultimate say and even deleted questions. Users were limited to one question, and duplicates were deleted.

Despite being among the highest ranked, a question by Breitbart technology editor Milo Yiannopoulos was ignored.

So what exactly did we learn about Trump from his Reddit AMA? Trump was given a finely curated list of five questions by the subreddit r/asktrumpsupporters, which is practically his base:

Trump’s response was a bit of a letdown. He answered only two questions, avoiding the more interesting ones on WikiLeaks and what he thinks of the the_donald subreddit.

1 – Voter fraud is always a serious concern and authorities must be vigilant from keeping those from voting that are not authorized to do so.

2 – Honestly I think NASA is wonderful! America has always led the world in space exploration.

The rest of Trump’s responses reflected his fondness for statistics, the use of “amazing” to describe healthcare policy platforms, and serial commas. Trump appeared to use the incorrect form of “than” on at least one occasion. 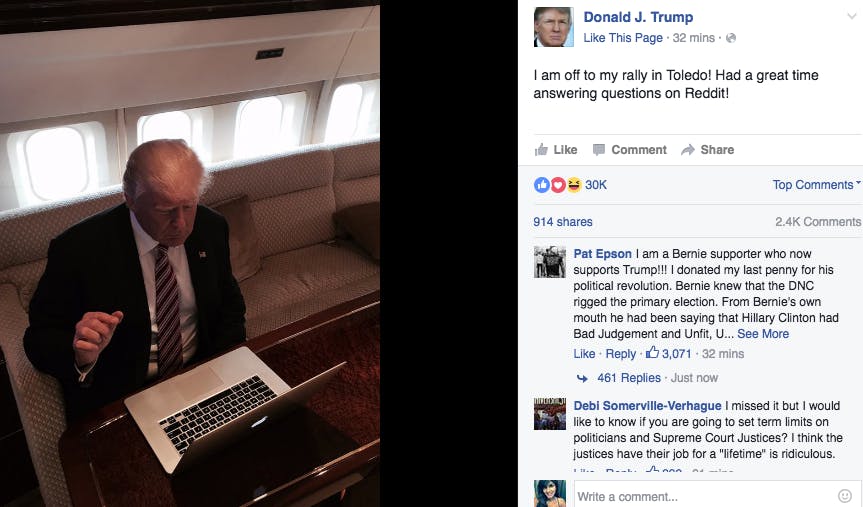 Here are the rest of the unedited questions that made the cut, and Trump’s responses.

1. A program meant bring truly exceptional talent to America has been twisted by globalist politicians and corporations, allowing low-cost, short term labor to steal jobs from everyday Americans and take everything they learn back to their home countries. Will you curb H-1B abuse and make sure visas are going to people who want to become American, stay American, and make America great?

I have put forward a detailed plan for H-1B reform to protect American workers which can viewed on the immigration paper on my website. My plan is the exact opposite of Crooked Hillary Clinton. (https://www.donaldjtrump.com/positions/immigration-reform)

2. What is your plan for reducing or removing the influence of money on politics?

Keeping Crooked Hillary Clinton out of the White House!

3. Mr. Trump, as a self-employed young American, my health insurance costs have skyrocketed under Obamacare. Paying close to $300 a month with a $6,000 deductible is a challenge as I try and grow my business. What will you do as President to ensure that myself and others can not only enjoy the security of having health insurance, but also afford to keep it?

One of the first things I will do is to repeal and replace disastrous Obamacare. I will put forward an amazing new plan, which will include many reforms, such as letting people buy insurance across state lines, increasing choice and competition, and bargaining for better, cheaper drug prices.

4) How will you, as president, tackle this protected class of media elites without stepping on the first amendment rights of average Americans?

I have been very concerned about media bias and the total dishonesty of the press. I think new media is a great way to get out the truth.

5) What do you think is/are the reason(s) for Hillary refusing to hold any press conferences for such a huge amount of time?

Crooked Hillary Clinton will not do press conferences because she cannot explain her illegally deleted 33,000 emails, or her disaster in Libya, or her role pushing TPP (which she would 100% approve if she got the chance), or her support for a 550% increase in Syrian refugees, etc.

6) What would say to a young college student like myself who is considering a job in law enforcement, but might have been discouraged by the recent attacks on police?

We will always stand with and support our nation’s amazing police. There is nothing more honorable then serving your community and your country as a law enforcement officer. My administration will protect those who protect us. Thank you to all the incredible police officers in our country tonight.

7) Which US president do you admire the most?

There have been many amazing Presidents in American history, including George Washington, Abraham Lincoln, Dwight Eisenhower and Ronald Reagan, all of whom I greatly admire.

8) What is the most important thing you would like to convey about yourself and your policy positions to the people who voted for Bernie in the primary but are now considering either staying home or voting third party in November?

Though Bernie is exhausted and has given up on his revolution, many of his voters still want to keep up the fight. I expect that millions of Bernie voters will refuse to vote for Hillary because of her support for the War in Iraq, the invasion of Libya, NAFTA and TPP, and of course because she is totally bought and sold by special interests. She and her husband have been paid millions and millions by global corporations and powerful interests who will control her every decision. She is their puppet, and they pull the strings.

9) Are you getting tired of winning?

I am never tired of winning, and as your president I will win for you, the American people. I’m with you!

10) Mr. Trump, what do you feel is the greatest issue facing young Americans today?

The question most young people ask me is about the rising cost of education, terrible student debt and total lack of jobs. Youth unemployment is through the roof, and millions more are underemployed. It’s a total disaster! I will create millions of new jobs, reform our education system, and work to free young Americans from the awful burden of debt.

11) Hello Mr. Trump. I’m 29 years old, registered Libertarian and have voted that way my entire life. I feel closely aligned with what the party stands for, and am passionate about it. However, this election I am starting to think that, while I think a Libertarian candidate is what’s best for America long term, that you may be what America needs right now. I also feel like you care about this country so, so much, and you want what’s best for it. This is a difficult decision for me, because on the issues I seem to either firmly believe or strongly disagree with what you have to say. I think you may be the best possible candidate for our economy, but I do fear some of your international policies, I know that I am not the only 3rd party voter that feels this way. So my question to you is, what do you say to people like me who are on the fence about voting 3rd party(Johnson/Stein) or for you?

Americans in every party are tired of our rigged system and corrupt politicians, and want to reform our government so it no longer benefits the powerful at the expense of everyone else. They know I will fix it so it works for them and their families. Hillary Clinton’s message is that things will never change. My message is that things have to change, and they have to change right now. We have to change a foreign policy that has led us to one economic disaster after another, and an economic policy that has failed our poorest citizens. We will never fix a rigged system by relying on the people who rigged it in the first place. I am going to return the government to the people.