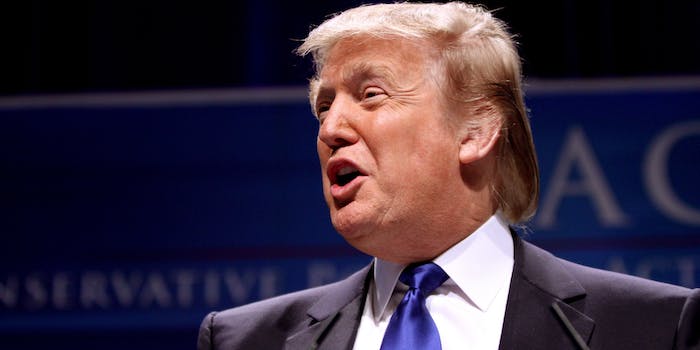 Have you been to Rahm Emanuel’s website recently? If so, you might notice an unexpected face gracing the screen: Donald Trump.

On Monday, the Chicago mayor criticized Trump’s presidential campaign. While voting in the Illinois primary race, Emanuel—who previously served as President Barack Obama’s White House chief of staff until 2010—commented on Trump’s noted ties to white supremacist groups. “Whether it was dealing with Mussolini or David Duke, his statements or the lack of clarity around his statements, you know, you sleep in the bed you make,” Emanuel told the Chicago Tribune. “And I think that playing with dark forces come[s] back to haunt you. And this is not a joke.”

Either Donald Trump himself or someone with a sense of humor responded by buying up Rahm Emanuel’s domain name. Currently, the URL for RahmEmanuel.com redirects to Trump’s own website—which is emblazoned with his “Make America Great” slogan.

This is just Trump’s most recent instance of domain trolling. Back in December, the Internet discovered that someone had purchased the domain for JebBush.com—which was reportedly on sale for $250,000. That’s, of course, chump change if you’re using your reported $4 billion in net worth to finance your own trip to the Oval Office.

This move followed months of head-butting between the two presidential hopefuls. Trump famously branded the former Florida governor as a “low-energy” candidate during the GOP presidential debates. In response, Bush referred to Trump as an obscene “bully.” He said, “we have a front-running candidate [who] pushes people down to make himself look big and strong.”

Now that Jeb Bush has dropped out of the race, it seems that Trump may have had the last laugh. JebBush.com is currently a blank page.

While acquiring the websites of many of his critics after their domains expire, he’s also reportedly bought up a lot of the domain names that would be used to strike back at him—including TrumpIsFired.com, NoMoreTrump.com, DonaldTrumpPonziScheme.com, TrumpCorporationSucks.com, and DonaldTrumpSucks.com.

He did not, however, purchase Loser.com, which would come back to haunt him. Following his loss in Iowa, someone snatched up that URL, which currently redirects to his Wikipedia page.

Trump has been at the forefront of the domain wars this entire election cycle, but he’s not the only one.

HillaryClinton.net used to take visitors to Carly Fiorina’s website, but the former Hewlett Packard chief forfeited the URL after she dropped out of the Republican presidential race. (Her campaign previously denied any involvement in the domain’s acquisition.) HillaryClinton.net now redirects to Trump’s page. And until recently, visiting CarlyFiorina.org would remind users of the 30,000 employees she was responsible for laying off during her time as the CEO of Hewlett-Packard.

Even Obama supporters have joined in. TedCruz.com displays a message about immigration reform—advising visitors to support Obama.

Clarification: It is currently unclear whether Trump owns RahmEmanuel.com, which redirects to Trump’s website, or some unrelated prankster.