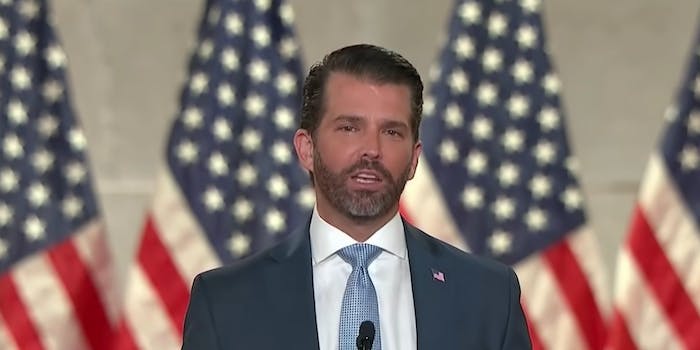 Donald Trump Jr. shared a photoshopped image to his Instagram account on Monday that showed his father awarding Kyle Rittenhouse the Presidential Medal of Freedom.

The image, which has so far received more than 243,000 likes, comes just days after Rittenhouse was found not guilty after killing two people and wounding a third during civil unrest in Wisconsin last year.

Instagram users both supportive of and opposed to the image flooded Trump Jr.’s post with nearly 3,000 comments.

Many users argued that they wanted the fictitious depiction to play out much sooner.

Others praised Rittenhouse as a hero and suggested he run for public office.

“Deffinately [sic] should make a run for mayor of kenosha,” another said.

Several conservatives expressed disdain for Rittenhouse after he claimed to support the Black Lives Matter movement during a recent interview with Fox News host Tucker Carlson.

Despite the criticism, the majority of conservatives still appear to side with Rittenhouse.