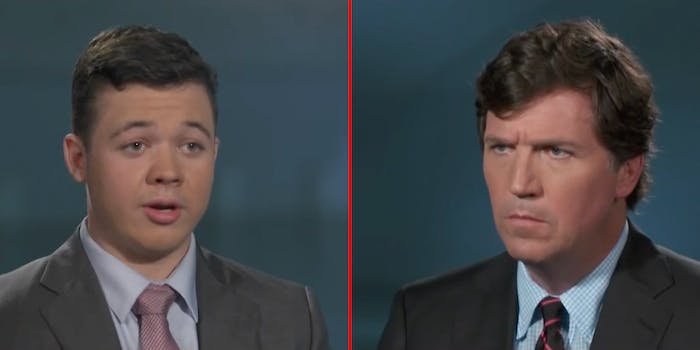 Members of a Proud Boys group are particularly dismayed.

On Friday, Rittenhouse, 18, was acquitted of killing two and wounding a third during a chaotic protest in Kenosha, Wisconsin over the police shooting of Jacob Blake. Blake, who is Black, was paralyzed after officers shot him seven times in the back.

After his arrest, Rittenhouse became something of a hero among conservatives. To them, he was a kid trying to protect the community. Fundraisers for his legal fees and expenses raised hundreds of thousands of dollars. His supporters vehemently denied that there were any racial undertones to their support of someone who went to a civil rights protest armed with an AR-15.

Some of them now regret supporting him, however. That’s because on Sunday Fox News released a clip of Rittenhouse’s interview with Tucker Carlson. In it, Rittenhouse said, “I’m not a racist person. I support the BLM movement. I support peacefully protesting.”

Reactions varied widely to Rittenhouse’s claim that he supports Black Lives Matter. Some suggested that he was insincere or trying to rehabilitate his public image. A smattering of conservatives argued that his statement was proof that race didn’t factor into the case.

Some of his supporters felt betrayed and angry.

“Fucking idiot we should not support him anymore,” a Gettr user wrote. Another said, “So does that mean he supports the rioting, looting, killing, and burning down businesses that this fascist BLM crowd does? If true, think I’ll take a pass on any donations.”

“Bad take, Kyle.. you shouldn’t support them,” commented a Twitter user whose screen name appears to be a play on Rittenhouse’s name.

A member of Ron Watkins’ Telegram chat channel suggested that Rittenhouse is a “fraud” and a “clown.” “Supports blm gtfo dumbass kid,” they added.

“I hope Rittenhouse doesn’t turn to BLM,” on subscriber wrote. “I’ve spent a lot of money on his innocence and support.”