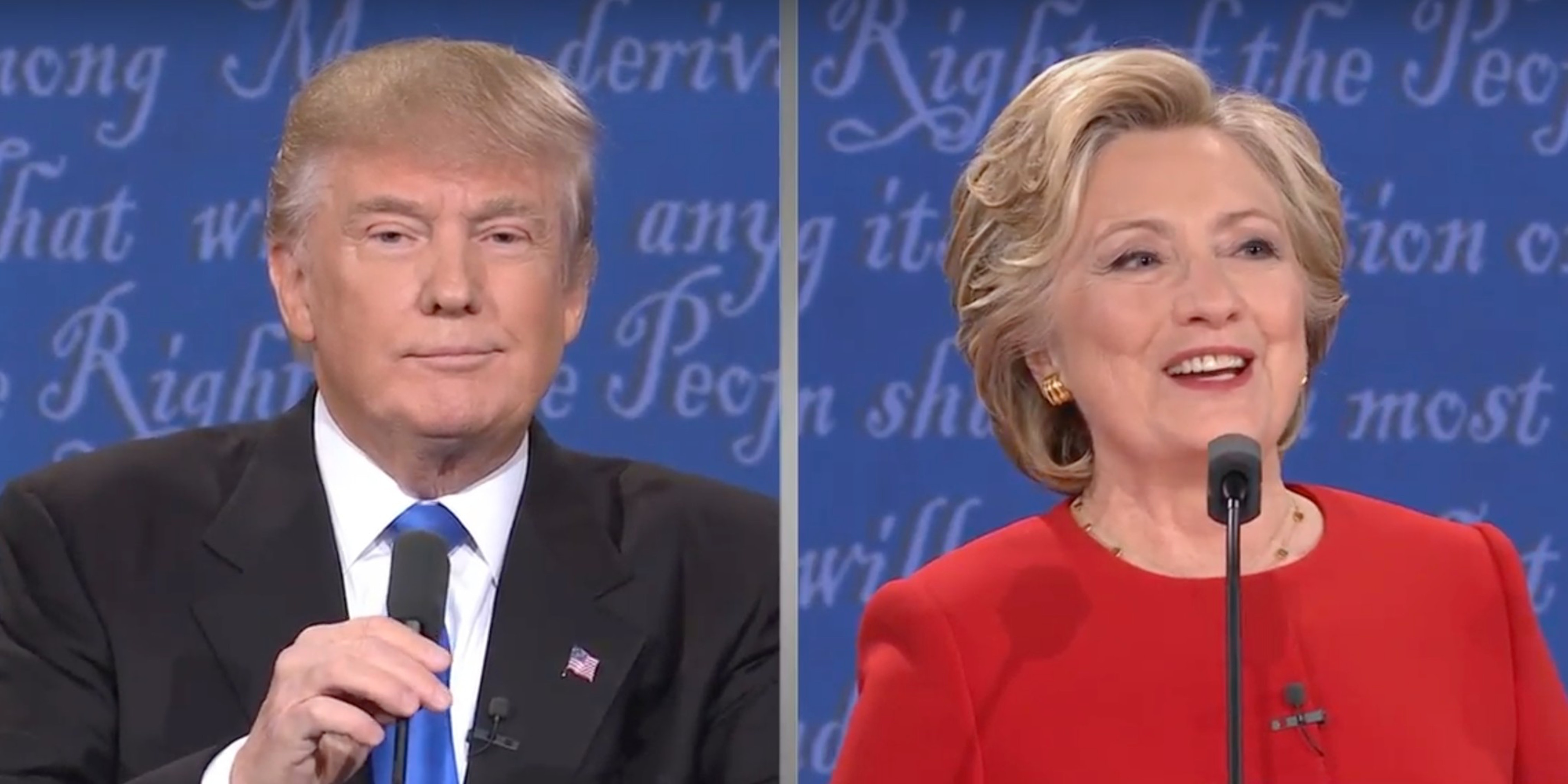 The biggest fact-check flunks of the first Trump–Clinton debate

You can't believe everything you hear—no matter who you support.

Facts are hard, especially if you’re standing on a stage with as many as 100 million people parsing your every word. Such is the job of Democrat Hillary Clinton and Republican Donald Trump, who on Monday night went head-to-head for the first debate of the 2016 election.

The nearly two-hour debate covered a wide range of topics, with plenty to parse from both candidates. (You can watch the whole thing here, if you missed it.) But there were a few truth blunders from both candidates that are worth clearing up. Here are some of the biggest fact failures of the first presidential debate.

As noted by the New York Times, the Donald Trump Tax Reform Plan would likely reduce the U.S. government’s revenue by somewhere between $4.4 trillion and $5.9 trillion, according to the conservative Tax Foundation. An analysis by the more liberal Citizens for Tax Justice (CTJ) set the base figure a little higher, at $4.8 trillion, over the next decade, the majority of the revenue loss coming from a reduction in personal income tax and payroll tax cuts. The largest tax cuts would benefit the top 1 percent of the income distribution, CTJ says, claiming additionally that tax hikes would be experienced by families currently paying the lowest tax rate (10 percent). A recent study from New York University School of Law states that Trump’s plan “would actually significantly raise taxes for millions of low- and middle-income families with children, with especially large tax increases for working single parents.”

It’s not difficult to find lists of millionaires, and even billionaires, who’ve called for a tax hike on America’s wealthiest citizens—one percenters. For example, this March, 40 millionaires asked New York state to raise taxes, saying, “we have both the ability and the responsibility to pay our fair share.” That doesn’t mean they all do, of course, but they’re out there.

Interest in this issue skyrocketed in the aftermath of the Orlando shooting when it was speculated that shooter Omar Marteen may have been placed on a terrorist watchlist. (Marteen was on the list, but removed in 2013, according to Bloomberg.) Clinton’s assertion that people on a no-fly list shouldn’t be allowed to buy guns is a contentious Second Amendment issue because of the number of people apparently mistakenly added to it, including, in one instance, a 7-year-old child.

As per President Obama, then-Secretary of State Clinton “forcefully argued in favor of the mission that took out Bin Laden.”

During a 2004 interview on Dateline NBC, Trump was asked about the pregnancy of Carolyn Kepcher, the executive vice president of Trump’s golf properties, who also appeared on The Apprentice. According to PolitiFact, Trump responded: “Well you know, pregnancy is never, um—it’s a wonderful thing for the woman, it’s a wonder thing for the husband, it’s certainly an inconvenience for a business.”

According to the Wall Street Journal, records from 1985 show that Trump owed his father and his father’s company approximately $14 million. Trump originally said he received a “small” loan of $1 million from Fred Trump, his father who first started the family’s real estate business.

Fact check: he did get $14 million in loans from dad.

This is a huge exaggeration. Clinton is 68-years-old, which means she’s been an “adult” for roughly 50 years. ISIS is, at most, little more than a decade old.

Trump has made this claim several times but there is no evidence to support it. His comments are likely in reference to a 2007 strategy memo in which a Clinton aide suggests pointing out Obama’s “lack of American roots.” But the memo also asserts the campaign would “never” say “anything” about Obama’s background. Clinton never acted on the advice, as PolitiFact points out. Further, a Clinton campaign worker in Iowa suggested Obama was Muslim. He was fired, and Clinton reportedly did not know about the incident until his employment termination.

Trump supported a war in Iraq publicly in his book, The America We Deserve, which he released a year before the Sept. 11, 2001, terrorist attacks. After the war started, but before American troops were deployed on the ground, Trump, again, supported a war in Iraq during an interview with Howard Stern, saying: “Yeah, I guess so; I wish the first time it was done correctly.” After deployment, Trump attacked the U.S. invasion, which he predicted would end with a new Saddam-like figure taking over and obtaining weapons of mass destruction. Trump has repeatedly claimed that privately he opposed the war all along, citing private phone conversations he allegedly had with Fox News host Sean Hannity.