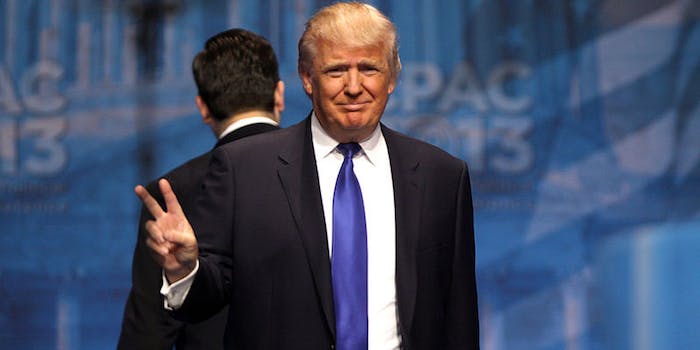 America is all about choice: Coke or Pepsi, Cubs or White Sox, Arby’s or nihilism. But the most important choice Americans make is their vote for the next president of the United States. And the road to Election Day 2016 is paved with far more choices than simply pulling a lever.

For example, you have many choices when it comes to customizing your your experience of reading news about Donald Trump. Simple, free Chrome extensions let you replace every mention of the Republican primary frontrunner with something stranger, funnier, or otherwise more palatable.

Here are some of the best options.

Replaces “Donald Trump” with “Someone With Tiny Hands” because Trump is apparently incredibly sensitive about his tiny fingers.

As the extension’s description says, “This Chrome extension will identify parts of a web page likely to contain Donald Trump and erase them from the Internet.”

This extension inserts a real honest-to-goodness Donald Trump quote between every mention of his first and last name.

Some argue that Trump is a demon warlock who feeds on the power of public attention to grow stronger and stronger. This extension takes that idea one step further by replacing every mention of the word Trump with the safe nickname of Lord Voldemort, “He-Who-Must-Not-Be-Named.”

6) Your Drunk Uncle at Thanksgiving

Every family has one of these, and now the Republican Party does, too. This extension replaces every mention of Trump with “your drunk uncle at Thanksgiving.”

In a blistering takedown of the Trump, Last Week Tonight host John Oliver urged people to refer to him by his family’s original last name, Drumpf, which has much less of a ring to it. He also created a Chrome extension so your Web browser can do that work all on its own.

Facebook recently rolled out reactions that let you do more than just “like” a piece of #content, but the new reactions aren’t nearly as expressive as Trump’s face. This extension fixes that problem.

This Facebook plugin lets you swap out reactions for Trump or Pokémon https://t.co/QxbwocDReP pic.twitter.com/JMLvJOGcTr

Trump: a sentient beef n cheddar who cares for nothing save his own immediate pleasure as he courts the end of all things
choose doom