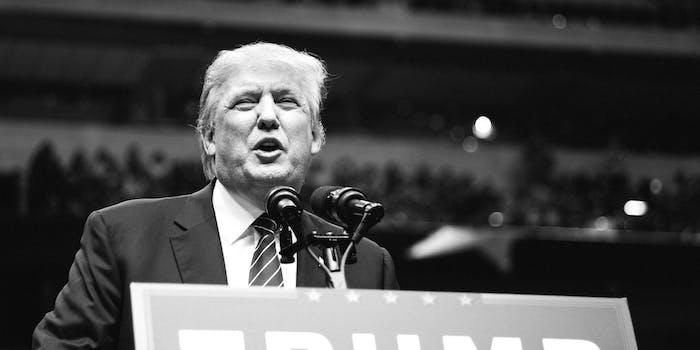 Photo by Jamelle Bouie/Flickr (CC BY 2.0)

A Florida mayor has responded to Donald Trump‘s proposal to ban Muslims from entering the country by banning the Republican presidential frontrunner from his city.

St. Petersburg Mayor Rick Kriseman, a Democrat, chided Trump on Twitter after the real-estate mogul called for a “total and complete shutdown of Muslims entering the United States” on Monday afternoon.

I am hereby barring Donald Trump from entering St. Petersburg until we fully understand the dangerous threat posed by all Trumps.

The mayor’s tweet played off the wording of Trump’s statement, in which the 2016 candidate argued in favor of turning away all Muslims until the federal government could “determine and understand this problem [of Islamic extremism] and the dangerous threat it poses…”

The Council on American-Islamic Relations (CAIR), the nation’s largest Muslim advocacy and civil-rights organization, condemned Trump’s remarks as “un-American” at a news conference late Monday. “This is outrageous from someone who wants to assume the highest office,” said Nihad Awad, CAIR’s executive director.

“Donald Trump sounds more like the leader of a lynch mob than a great nation like ours,” Awad added. He also called Trump’s behavior “a great service to ISIS.”

In an interview with Fox News hours earlier, Trump explained that his proposal would not apply to Muslim Americans and Muslims already living legally in the country. “It does not apply to people living in the country,” he said, “except we have to be vigilant.”

Asked whether his ban would apply to Muslims serving in the U.S. military overseas, he responded, “They will come home.”

Photo by Jamelle Bouie/Flickr (CC BY 2.0)