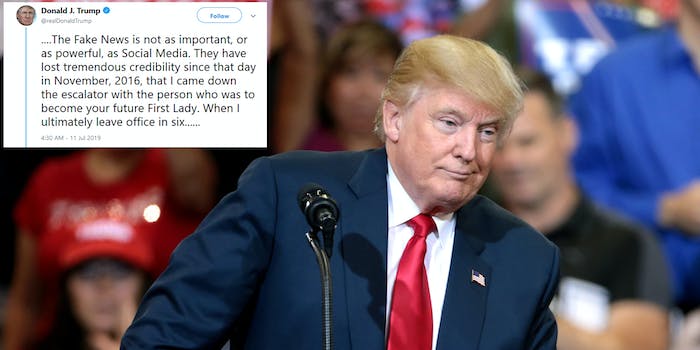 There's a lot going on in the thread.

President Donald Trump appeared to mistakenly say he launched his campaign the same month that he was elected in an all-over-the-place Twitter thread on Thursday morning.

The president made the mistake in a series of tweets where he hit many of the highlights you typically see in his Twitter feed: perceived bias in social media, criticizing the news media, joking about being in office for decades, bashing 2020 Democratic hopefuls, and calling himself “so great looking and smart.”

However, amid the list of criticisms, Trump said that the media had “lost tremendous credibility” since “that day in November, 2016, that I came down the escalator with the person who was to become your future First Lady.”

“….The Fake News is not as important, or as powerful, as Social Media. They have lost tremendous credibility since that day in November, 2016, that I came down the escalator with the person who was to become your future First Lady. When I ultimately leave office in six……” 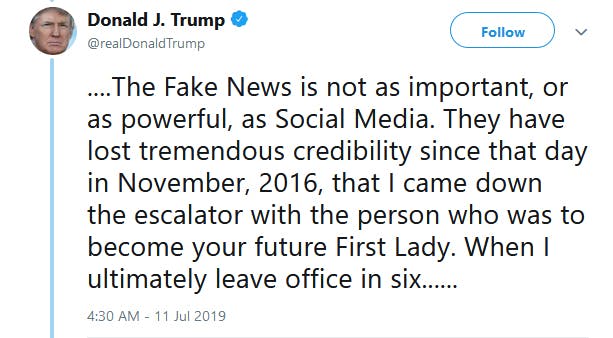 It appears that Trump got some dates confused. It looks like he was referencing his campaign kickoff in Trump Tower when he descended an escalator before giving his speech. However, that was in June 2015, not November 2016, when he was elected.

Unless he’s talking about some other since undisclosed escalator ride in November 2016?

Regardless, the entire thread caught the eye of people on Twitter:

I know this is hardly the worst part of Trump's thread, but… pretty sure that escalator moment was not in November 2016 https://t.co/VgI26JFuXb

This genuinely reads like a Trump bot slamming together unrelated events, with no respect to time or place. He came down the escalator in June of 2015; he won the election in November 2016. But, hey, it's all a nightmarish blur to us too. https://t.co/jwbVmmUH7K

Somebody help the President is broken https://t.co/UYJfqsATaV

The thread from the president was part of 13 tweets he posted on Thursday morning.