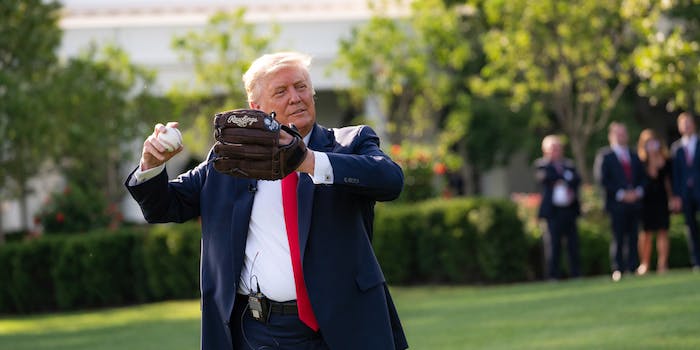 President Donald Trump was jealous of Dr. Anthony Fauci throwing out a first pitch on Major League Baseball’s (MLB) Opening Day, so he announced that he would be doing the same with the New York Yankees—to the surprise of the team, according to a new report.

The New York Times found that Trump’s announcement last week that he would be throwing out the first pitch before a New York Yankees game on Aug. 15 was a shock to the team and White House aides.

Trump was not invited by the Yankees to take part in the ceremony that day, a source told the Times, and the president was already booked on that day.

A few days after his announcement, Trump said he canceled the first pitch because he was too busy with meetings about the coronavirus pandemic. He also said he would “make it later in the season.”

Fauci garnered attention for throwing out the first pitch of the shortened MLB season, which was shaved down to 60 games because of the pandemic. There has already been an outbreak of positive cases for one team, leading to multiple games being canceled.

While Fauci did get attention—perhaps a reason for Trump’s random announcement that he too would throw a first pitch—his time on the mound didn’t exactly go as planned.